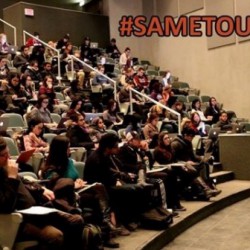 Santiago Escobar is driving back from St. Catharines to Toronto. Riding shotgun is his friend and union colleague, Pablo Godoy, the national representative for the United Food and Commercial Workers International Union (UFCW).

They’re returning home from Brock University, where they spent the last 10 hours talking with 300 students about the plight of migrant workers. On this particular day, they began at 8 a.m., and it’s just after 6 in the evening when Godoy answers the phone.

He explains they’ve just finished their third presentation of the day and that they have nearly a month left to go of this. 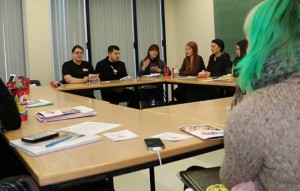 Godoy and Escobar are co-ordinators at Students Against Migrant Exploitation, a program begun by UFCW in 2010 to raise awareness about migrant workers’ rights. Their visit to Brock was part of a 30-day tour across campuses in Ontario just for that purpose, which began on Feb. 27.

“We talk to students about the…living and working conditions (of migrant workers),” says Godoy. “We try to get young people interested so they start their own chapters, build awareness, fundraisers, etc.”

It’s also one of the many strategies unions are using to appeal to younger audiences, hoping they’ll join the labour movement and help it survive.

Put simply, Godoy says, the problem is that our population is aging. That means the labour force is, and will be, driven by new generations of workers that either bring new perspectives into the movement or allow it to die.

“Young people have energy and drive,” says Godoy, who is 28. “So even if we didn’t engage them, they’d eventually find a way to organize themselves. But unions…need to find ways to integrate them because of the energy and creativity they can imbue the labour movement with.”

The UFCW is campaigning to capitalize on the armies of unemployed and frustrated young people desperate to make a quick buck. But it’s also aiming for those already working in places with no unions and seeking help.

For instance, at an H&M store, a retail clothing shop, UFCW members helped a group of employees organize. The employees had reached out to them, says Godoy.

“We only provided them the know-how. They exposed themselves and put their feet out there and risked reprimands from the employers all by themselves,” he said.

About 40 per cent of UFCW members are under 30 years old. Many work in retail, and many also occupy posts at the union’s national office, Godoy says. All of this is an advantage, but also one of the main reasons they have the resources – namely time and energy – to run around campuses and high schools recruiting potential members.

It’s also why Godoy and Escobar are travelling tirelessly across the province.

Yet, they’re not alone.

While the UFCW hits the road, Unifor, the recently merged mega-union between the CAW and CEP, looks closer to home.

Currently, Statistics Canada estimates about 14 per cent of 15-to-24-year-olds in Ontario are unemployed – twice the national average.

That’s apart from all those people bouncing from place to place in precarious work – temporary agency work, contracts and short- or part-time leave positions. Unifor is trying to target these sectors through Community Chapters.

People working in these types of temporary jobs, or even in between jobs, can band together and apply to become a community chapter.

“We’ve provided a platform for these people to come together,” said DiCaro. “They pay a nominal dues fee, but they get the full benefits of being in the union” – everything from information and education on union politics to benefits and collective bargaining power.

One of these chapters – Unifaith – is in London. It’s the country’s first union for clergy. So far, this is only the second of two chapters formed, “but dozens more are coming,” said DiCaro.

There’s also a national Young Workers program that has set up youth committees across the country. Jim Reid, president of Local 27, in London, said one will be formed here over the next couple of months.

DiCaro said Unifor is also looking internally to educate existing members about the history of the movement and about ways to get active within the union.

“It’s reaching out to young members, so they can play an active role in building the union themselves…by impressing upon them the importance of… (coming) to meetings,” he said. 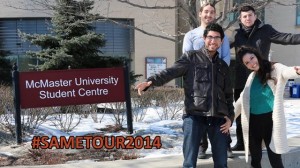 Pablo Godoy (top right) with three of the six team members who presented at McMaster University.
Photo courtesy of S.A.M.E.

Part of this effort involves a week-long, biannual young worker’s conference in Port Elgin, Ont., as well as a labour studies course offered at McMaster University, exclusively for Unifor members.

DiCaro is confident  the results of this outreach are clear and evident.

“The role we play is transformative,” he said. “Members run campaigns, connect with the community…Some have gone on to become community activists… (Others) run for city council positions…and in federal ridings.”

Of course, the road to full integration is still long.

During the Founder’s Day celebrations at Western University one Saturday, a couple of adjunct professors took to Twitter to vent their frustrations over issues of low pay and job insecurity.

In an article in the Western Gazette, the University of Western Ontario Faculty Association confirmed these are important issues to be debated in upcoming negotiations with the university.

Unifor’s community chapters are trying to reach people like these professors, who are in unstable jobs, but some people argue that unions have failed to connect with the associations already representing them.

D.W. Livingstone, Canada research chair in lifelong learning and work at the University of Toronto, said one reason for this oversight is the huge change in the class composition of the labour force. The number of professional employees is growing while the base of industrial workers is shrinking.

This means that more people consider themselves middle class and therefore decrease their support for the rights of the working class, he said.

Livingstone said although unions are “doing the best they can under the circumstances,” he would like to see them doing more to tap into these largely ignored organizations.

“Many professional employees, technologists and technicians, have not traditionally seen themselves as eligible for labour unions,” he said. “The reality now is that about 20 per cent of the Canadian labour force is in associations… (that) are becoming economic collective bargaining organizations… But the trade union movement has largely ignored (them).”

Yet, the fact remains that unions are aware of their apparent middle-age crisis, and they are doing everything they can to reinvent themselves.

The point is, young is in.

The importance of youth

As a teenager, Pablo Godoy became interested in joining the union at Loblaws because of a problem he was having with his boss. When he found out the place was unionized, he joined.

By 17, he played an active role in UFCW’s talking union program, which took young union reps into stores and schools to talk about unions and working rights. At 23, he became one of the youngest national representatives at UFCW.

“It’s important to understand how important, enthusiastic, creative and capable the student mass and young people as a whole are,” he says, as he makes his way back to Toronto to finally get some rest for the day. “That’s not just unions but any type of social movement.”

Like many other labour leaders, he makes sure to point out that the issue with young people today is not that they are apathetic to the labour movement, but simply lack understanding of it. “A lot of young people don’t have the information for their organization,” he says, “or know that you actually have rights.”

That’s why he is so enthusiastic about Students Against Migrant Exploitation, because he’s seen what providing this information to students can do. Last year, more than 100 students from an alternative high school in Toronto set up the first-ever high-school chapter to talk to students about migrant worker’s rights.

“So you see pockets of students and young people really interested and informed, that really want to make a difference….But there are (many) that just don’t get this information….As a student in high school, I never learned about my rights at a workplace.”

Message of an elementary student from a workshop held last year.
Photo courtesy of S.A.M.E.

That’s why Godoy says for the labour movement to survive, it’s important to get them young. To educate them before they enter the labour force. And, more importantly, to teach them where they came from.

“A lot of workers today take for granted the things they have, including their breaks, vacations, Canada Pension Plan, employment insurance,” he says.

“It goes unnoticed and unappreciated that those things came from somewhere, and that if we don’t fight to keep them, they will be very easily rescinded and taken back.”