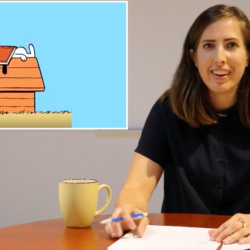 By Howard, Gregory on October 30, 2017 in Capstone Projects, Story

When Stephanie Gordon finished her undergraduate degree, she had many interests and wanted to have as many options open to her as possible. When selecting a graduate program, the MMJC program peaked her interest for a number of reasons. Being a yearlong program was certainly a big selling point. More importantly, as a storyteller she found the opportunity to learn the elements of both journalism and communications appealing as it would open more doors for her professionally.

As someone who was drawn to long-form journalism and humour, Stephanie was interested in the growing use of satire in journalism. Stephanie believes that under the guise of satire, you can critique much more freely than you can under “objectivity” requirements of news. As a fan of Last Week Tonight with John Oliver, for her capstone project, Stephanie wanted to test her abilities and do an in-depth segment on Sarnia’s Chemical Valley – but in a satirical way. Interning at Global News, Stephanie was immersed in the subject as the station developed a half hour documentary on the subject which aired on October 14, 2017.

You can watch Stephanie’s Last Week Tonight satirical take on the story here.

Capstone Projects are produced by MMJC students at the very end of the program, as a chance to demonstrate their new skills and explore ideas and themes that interest them.  Learn more about the MMJC program and apply at the FIMS website: fims.uwo.ca/mmjc

What they don’t see: Hannibal -a basketball story
CanCon Podcasts