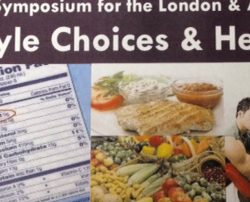 By Taylor Simmons on March 27, 2015 in Campus, Community, Health, Sports

We all know exercise is good for us, but does that mean we do it? Most people don’t, according to Dr. Peter Lemon, Western University professor and Director of the Exercise Nutrition Research Laboratory.

That’s why he organizes the Exercise and Nutrition Symposium, an event aimed at informing both students and the wider London community.

This year, the 10th annual gathering will present 10 speakers focusing on topics related to lifestyle choices and health.

The keynote speaker, Jana Webb, will be discussing her new program called ‘joga’ – yoga for jocks – which is more intensely geared for physically active people and athletes.

Other speeches will be aimed at beginners and those wishing to learn more, such as the benefits of exercise and the effectiveness of cutting-out grains to lose weight.

Lemon’s talk will focus on why exercise sometimes doesn’t work, especially for women.

“One of the things that everyone believes is that exercise will cause a decrease in body fat, and the reality is that it doesn’t work very well,” he said. “You might say to yourself, ‘Well I worked out today so I can veg out on the couch here and watch this movie,’ or ‘I can have that second dessert.’”

Despite getting all of the health benefits from exercising, giving yourself these ‘awards’ after a workout will negate your effort, Lemon said.

“So many of them will stop exercising after a few weeks because they don’t see this effect on body composition,” he said. “So one of the things I’m trying to communicate in this talk is why this is the case, and making sure people understand.”

Even while trying to monitor this workout, reward balance, many of us don’t even get the amount of exercise we need.

Lemon hopes to educate the remaining population, the 95 per cent, who aren’t getting what they need.

These people can end up ‘over-fat,’ something very different from overweight.

“Over-fat refers to people who are not just heavy on the scale, but who are heavy because their body composition has a large percentage of fat,” he said, as opposed to athletes who may be overweight because of muscle.

To get back on track, Lemon says people should make the behavourial changes we all know are important – healthy eating, plentiful exercise and mindful snacking. Participants of the symposium will learn more about this topic, but they’ll also be helping a team at Western continue to dominate at nationals. The team won nationals for a fourth year in a row this season, but they could have made this their fifth if they hadn’t struggled with finances.

“Five years ago we were undefeated and therefore we qualified to go to nationals, but we didn’t have the money to go,” he said. “So probably we were the best team in the country and we couldn’t go.”

To get an idea of the travel cost, Lemon said this season’s trip to nationals in Calgary cost a total of $25,000.

The symposium is one of the team’s major fundraisers, allowing them to raise money while sharing their expertise with the community.

Each of the speakers also pays their own way to the city to share their knowledge.

“The university provides the room, all of the facilities, the speakers donate their time, so every single dollar of the registration fee goes to the softball team,” Lemon said.

The symposium begins at 9 a.m. on Saturday March 28, and the next season of women’s fast-pitch softball will start-up in September.

View all posts by Taylor Simmons →