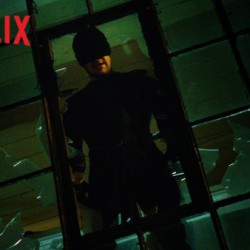 Superhero Daredevil has a violent no-holds barred approach to fighting crime. So it’s fitting that Netflix, not bound by traditional network TV standards, is releasing one of the grittiest comic book adaptions ever produced.

As of 12:01am this morning, all 13 episodes of the Marvel-produced series were released by the paid subscription movie service Netflix and will be the first of five comic book television adaptations for Netflix.

Although the series is set in the same universe as the fanatical films of Iron Man, Thor, the Avengers, and Guardians of the Galaxy but Daredevil is a more grounded series that follows Matt Murdock, a blind attorney by day and vigilante by night in New York’s Hell’s Kitchen.

The complete drop of the entire first season of the Daredevil means that long binge-watching sessions are what Netflix is counting on. Binge-watching was common for House of Cards, Orange is the New Black and Arrested Development.

Because Netflix is not beholden to the FCC, the regulatory body in the United States, the series can show more violence. Christopher Runciman, the assistant manager of Heroes Comics in London says that the move to a less restrictive video service like Netflix can only mean truer adaptations.

“Nowadays, when you don’t have regulatory bodies apply to things, they (Daredevil producers) can have creative freedom,” Ranchman said. “Creative freedom is a very important.”

Charlie Cox, from HBO’s Boardwalk Empire, is starring in the pivotal role with NBC’s Law and Order actor Vincent D’Onofrio playing Wilson Fisk, a bald crime boss with a megalomaniac and violent streak. Although they are at odds, both of the characters have a penchant for brutality.

The first season is based on the exploits of the Daredevil series: Man Without Fear which was written by graphic novel legend, Frank Miller, who is known for his darker, violent, grittier stories since the 1980s. Including source material that Christopher Nolan would use for the popular Batman film reboot.

The exploits of the Marvel film characters is very much a part of the story. It could be described as a crime series taking place in the Marvel universe, as Murdock’s law firm was bought on the cheap after the alien invasion of 2012 ’s The Avengers movie.

But the series will depict the character brutally attacking criminals, breaking his own bones and getting severely hurt from his vigilante attempts to fix his city.

The no-holds barred adaptions of comic characters includes the upcoming Marvel film Deadpool is not being targeted for children and is opting for the R- rating is the way people’s tastes are evolving and demanding.

“He’s a mentally unbalanced, dissociative character, he kills without impunity. So when you have an anti-hero character like that … for the writers to explore that level of disconnect you’re going to need an R-rating,” Ranchman said.

“Are they for children? No. This is indicative of the times, not really the lack of FCC censoring, but the lack of the censoring from the general public is what’s happening. and their own discernment. We’re not as restrained as we once were.”

Runciman, whose Heroes Comics has been a staple in London since 1991, says that anytime a comic book character shows up outside of the pages of the tactile medium it’s good news for the comic industry.

“Any portrayals in other mediums. When they all get on the bandwagon of what was the undercurrent before – it’s fantastic for us. There are is always reciprocity for that. People are always going to venture into the source media.”

He says as long as the symbiotic relationship between the comics and TV or film adaptations stays lucritive, the bubble isn’t going to burst.