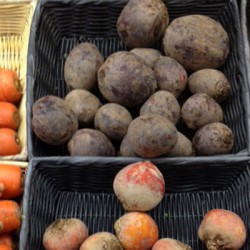 All it holds is milk, a few eggs and a container of whey, a by-product of cheese that Elsby makes in her Elora, Ont. apartment.

Her refrigerator is nearly empty, but her freezer is overflowing with produce from last summer.

Peaches, Brussels sprouts and more burst out, ready to be defrosted and used in soups, salads and stir-fries, Elsby, 29, says. 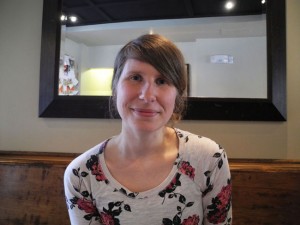 Her pantry is a similar story, brimming with root vegetables such as sweet potatoes, carrots and beets.Welcome to eating local after a long, cold Canadian winter.

The local food movement focuses on purchasing and eating locally-produced food for environmental, economic and community reasons, according to Carolyn Young, a spokeswoman for Sustain Ontario, a cross-sector alliance group that promotes healthy food and farming.

But while farmers’ markets are bustling hot spots in the summer when Ontario-grown produce is in abundance, eating local the rest of the year can seem daunting, difficult and downright depressing.

Just ask Aaron Case, 32, who stocked up his cart when blackberries from Mexico went on sale at a London-area grocery store.

“Honestly, the thought of eating potatoes every day all winter is really sad,” Case said. “Yeah, it’s nice to support local farmers, but I think we also need to think of our own health, getting enough vitamins, and when there’s deals like this on fruit, you’ve gotta take advantage of it.” 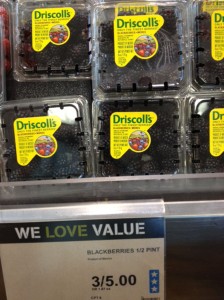 Cheap berries imported from other countries can be tempting, but local food enthusiasts stick to frozen fruit out of season.
Photo by Katie Starr.

Local food enthusiasts have heard the argument before, and they’re not buying it. “There are lots of opportunities to get all your necessary vitamins and food groups covered in the winter,” Young from Sustain Ontario says. Just a sampling of local, Ontario-grown food available in March includes cabbage, beets, carrots, leeks, garlic, parsnips, rutabaga, squash and sweet potatoes, according to Foodland Ontario’s website.

“What it takes is a bit of commitment, creativity and time,” says Young. “The average Ontarian spends 45 minutes preparing food and cleaning up after it, and two hours or more on Facebook and TV.”

What needs to happen is a “reprioritizing and revaluing” of food, she says. “We need to start asking ourselves, what is food contributing to our health, our family life, our community? Eating local is all about making it a social event.”

“I think we treat making food as an inconvenience rather than something that is to be enjoyed,” she says. “So people will buy the jar of peanut butter instead of making their own – and all you need is a bag of peanuts and a food processor to do that – because then you can watch half an hour of commercials along with your TV show or scroll through Pinterest at 11 at night.”

She adds with a laugh: “And I can be the worst for it!”

One way to enjoy food preparation is to lose yourself in the moment, Elsby says.

She makes her own curry powder with a mortar and pestle, although Elsby remembers her first time wasn’t so smooth. “For the first little while I was grinding the spices and just…” She makes a face and mimes angrily crushing spices.

“But then I thought, why not just enjoy it and treat it as a moment? Relax, meditate, and get into it. Yes, sure there might be a big chunk of coriander seed in there, but now you can say, I made this!”

Elsby’s passion for local food goes beyond making food for herself though.

“The local food movement really brings communities together,” she says, pointing to Slow Food Elora and other area groups and restaurants that host events, dinners and workshops.

The link between local food and community is something she explores as a food blogger and co-owner of Elora Bread Trading Co., where she bakes bread from locally-sourced ingredients.

But Elsby is quick to point out that eating local is not about “perfect” eating.

“I won’t buy anything that I could get here in season, like strawberries,
she says. “But there are some things that don’t grow in Canada at all, so I will buy an avocado. Every once in a while I’ll buy citrus, because if my body feels like it needs it, I’ll get the orange or lemons.”

As Young from Sustain Ontario puts it, “Eating local is about doing the best you can, for you, for farmers and the local economy, and for the community.”

And after a long Canadian winter of parsnips, potatoes and preserves, just think how good that slice of juicy watermelon in July will taste.

– Buy a share or half-share in a Community Supported Agriculture (CSA). You’ll get weekly deliveries of farm-fresh produce, eggs and more, all season long.

– Freeze your own fruit: wash, let dry fully and put on a baking tray so the fruit is separated and won’t freeze together. Freeze overnight, then store in plastic bags. When ready to eat, thaw the fruit under warm water. Freezing also preserves vitamins that are lost in canning and preserving.

– Go to farmers’ markets at the end of the morning or on rainy days when the markets aren’t busy. You can get some great deals because farmers will want to get rid of the produce they can’t sell.

– Don’t think you need to stick to boiled veggies – roasted root vegetables and cabbage have fantastic flavour and more nutrients.