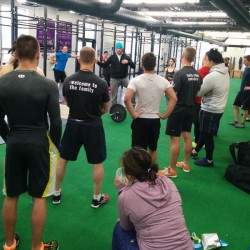 With that enthusiastic countdown, the first heat of Crossfit athletes got down to work at Hybrid Fitness Centre. Their grunts and cries of exhaustion were barely audible over the shouts of support from the athletes waiting on the sidelines.

This will be the scene at the London gym for the next few Saturdays. The Crossfit Games Open is on, so for these athletes – it’s go time.

The Crossfit Games Open is a global contest organized by the popular fitness company to find the fittest athletes in the world. Crossfit headquarters announces a specific workout every week for five weeks. 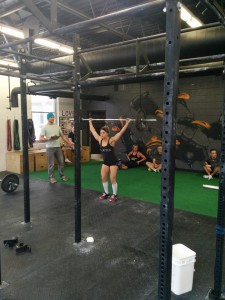 The competitors then do the workout at a registered Crossfit affiliate or film it at home to send in for judging. They are ranked against other athletes in their region, and the top athletes move on to the next round of competition.

This week, the workout (crossfitters call it the workout of the day or WOD) was as many rounds as possible in 10 minutes of 30 double-unders (jump-rope with the rope passing under the athletes’ feet twice each jump) and 15 power snatches (a movement in which athletes lift a barbell from the ground to overhead in one motion).

The weight was adjusted for the different age and gender groups, ranging from 75 pounds in the men’s division to 45 pounds in the 55 and older women’s category.

“If I can get to nine rounds, I’ll be thrilled,” said Jenn Lymburner before her turn. Lymburner has been doing Crossfit for two years and is one of the most successful crossfitters at Hybrid. Last year, she placed sixth in the East Canada region and went on to place 13th at the regional competition.

Lymburner has her sights set on beating that result this year. “Regionals is the big picture. This is just a stepping stone,” she said.

In total, 32 athletes competed in the first Crossfit Games Open WOD at Hybrid this year. They are competing against more than 100,000 people worldwide. 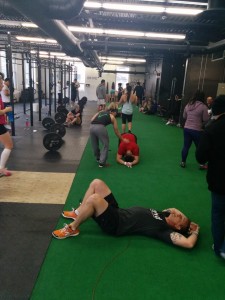 Crossfit is a fitness program that has been growing in popularity over the last five years. Affiliated gyms usually offer high-intensity circuit training in a group setting. Crossfit workouts are usually structured like the competition WOD. They encompass a wide variety of exercises intended to create well-rounded athletes.

Crossfit has a reputation for being brutally difficult, and crossfitters take pride in their torn hands and mental tenacity.

Crossfitters aren’t all hardcore athletes, though.

“The last time I competed was on the Grade 10 swim team,” said Jeff Kemp. He was proud of his performance, especially in the double-unders, which many people find difficult. “Today, I was on.”

Kim Levy, another competitor, said that everyone can compete in the Open. “It’s just to push yourself and to see where you are in your age group,” she said.

Levy, who finished with 215 total reps (the score for this particular workout was determined by adding the total number of double-unders and snatches performed), is turning 50 next year. At that age, she will be able to compete in one of the masters divisions. “Next year, I’m really going to go for it.” 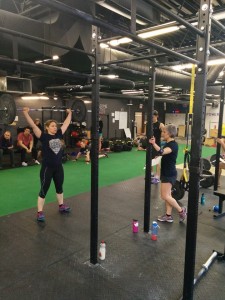 Kim Levy helps judge other athletes after her heat.
Photo by Clark Teeple

She still went for it this time, despite suffering from tennis elbow. “The weights were the hardest,” she said. “My forearms were so tired, I couldn’t hang on.”

She had plenty of support to help her through. The last 30 seconds of each heat saw the gym descend into chaos, with onlookers shouting encouragement to the clearly exhausted athletes. This support wasn’t limited to the competitive athletes.

“It doesn’t matter if you’re new or if you’re a seasoned crossfitter, everyone is going to support you,” said Lymburner. “We’re all suffering the same.”

Lymburner ended up performing 364 reps, which was just shy of her goal. “It’s not what I wanted,” she said between gasps for air. “I just took too many breaks. There’s going to be a lot of girls ahead of me.”

She has four weeks to catch up, though, and there is no doubt in her mind that she can do it. “I just need to be more mentally strong.”