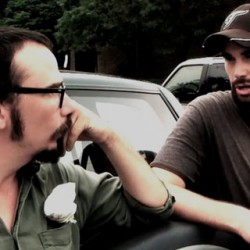 Toronto-based filmmakers Jason and Brett Butler wanted to capture a scene in a bakery for their latest feature, a dark comedy called Mourning Has Broken.

But the bakeries they had in mind for a scene were unavailable, and since budgets for time and money were small – five days and $1,000 – they did what independent movie-makers must often do.

They improvised … in a hurry.

The Butlers called a friend who owned an auto garage, quickly wrote a new scene set there and filmed it two days later instead of the bakery scene.

“We got what we wanted but in a different way and it worked out great,” said Jason in a phone interview from Toronto.

Those kinds of experiences – making movies on the fly, with little money ­– will be the focus of a master class the Butlers are set to give March 2 at the Domestic Arrivals Festival of Canadian Film at Museum London.

The class is aimed at filmmakers of all experience levels and will be a major feature of the festival, which runs Feb. 28 to March 3.

Domestic Arrivals began last year as a pilot project, but this year is the “full launch,” said organizer Dianne Pearce, who is also Museum London’s curator of public programs.

The festival is scheduled to show 13 Canadian films in the museum’s lower-level theatre, plus another feature that’s only available to school groups, Pearce said.

Short films by students from across Canada will also be screened before some of the feature films, Pearce added.

The movies showing at this year’s festival will be revealed at a Feb. 14 preview event, and Pearce isn’t releasing any names before then.

But the festival is meant to showcase the diversity of Canadian cinema and how Canadians construct identity through film.

“The range of themes and topics is just phenomenal,” Pearce said.

Domestic Arrivals evolved out of a monthly Canadian film series Museum London ran in 2010 and 2011.

To generate more buzz, organizers thought it might be interesting to package it all together as a festival, Pearce said.

“We brought in the same number of films and put them all together and we screened them over four days,” she said.

Katy Boychuk of Museum London is ready for the Domestic Arrivals Festival of Canadian Film.
Photo by Ben Forrest

This year organizers added more films and are working to attract more directors and actors to the festival.

“We really hope that it does grow and that the locals and the city start to recognize it as an annual event – something that they look forward to each year,” Pearce said.

Organizers invited the Butler brothers in part because of their involvement in the 1K Wave, a Toronto contest where filmmakers made movies for $1,000 each.

That was a relatively large budget for the Butlers, whose previous two features cost $500 and $250, Jason said.

Mourning Has Broken was their 1K Wave film – a comedy that follows a man after he learns his wife has died of a terminal illness.

Unable to deal with his wife’s death, the character goes about the day like any other, completing tasks on a to-do list he comes to see as a record of his wife’s last wishes.

The character starts acting out over small things that anger him, something the Butlers used as a platform to address “all those things that bother us in society but we never really do anything about,” Jason said.

They also wanted to open people up to the idea that everyone grieves differently, he added.

With Mourning Has Broken finished, the Butlers are preparing to release an online video series called The Undrawn that was created with about $15,000 in donations from a crowd-funding campaign on the website Kickstarter.

That isn’t much money for six five-minute episodes, but the Butlers’ goal was to create something “with a high-gloss value” that can be turned into a TV series, Jason said.

“Having that money was almost a bit of a burden because you wanted to make sure you got the maximum value from it,” he added.

“Having that kind of budget, it does evaporate quickly – on equipment, on crew and shooting on locations and stuff like that.”

So what would happen in a world of unlimited budgets? Would the Butlers make the same kinds of films they do now?

Jason likes to think they would.

But they would take more time and give better pay to the people they’ve worked with in the past, he said.

“We work with really talented people all the time, and it’s a tough business,” Jason added. “The celebrities and all the people you see, they’re only what – two per cent of the working actors and crew out there.

“There’s a lot that are just getting by.”

Mourning Has Broken – Teaser 3 from SubProd on Vimeo.