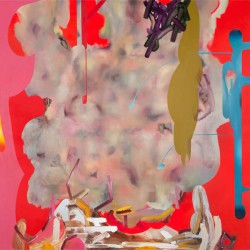 It is double the fun at Michael Gibson Gallery as not one, but two exhibitions are opening tonight.

It is Mullin’s first exhibition with the gallery and the first time he sets foot in London.

Mullin’s work is characterized by shapes merging into each other, with vivid or darker colours mixing in contradiction. “I was trying to create a combination of forms and elements that are not expected to come together,” he says of the series.

Mullin says that he wanted to create paintings that had a colourful and performative quality to them but that could also purposely feel awkward and wonky. “Just like knowing how a magic trick is performed,” he says.

The artist was inspired by a childhood fascination for magic and special effects. “I’m interested in how abstract painting is like a behind the scenes at how magic and illusions happen,” he says. “It’s like you look at what happens behind the illusion. It’s a way of showing the hidden secret parts in the magic of painting,” he says.

Mullin worked on this series at a remarkably rapid pace. Two of the paintings were started when Michael Gibson travelled to Calgary in 2014 to visit the artist.

Gibson was quite fascinated by them, and commissioned the artist to complete more for an upcoming exhibition.

The project resulted in 10 new paintings completed in 2015. “It’s been a long time I haven’t created a big body of work like this in such a short time, and its exciting to see the results,” he says.

Mullin’s paintings have a performative quality to them because of their inspiration and because of how the artist works. “I have to perform on the canvas,” he says.

Mark Mullin is a respected artist with many solo shows and artist residencies under his belt. He is based in Calgary since 2003, where he paints and teaches at the Alberta College of Art and Design. Mullin is represented by the Paul Kuhn Gallery in Calgary and the Michael Gibson gallery in London.

The prints and drawings come from a handful of influencing Inuit artists from the tiny artistic community of Cape Dorset, Nunavut.
Prints from Kenojuak Ashevak, Shuvinai Ashoona, Tim Pitsiulak, Saimayu Akesuk and Siassie Kenneally will be showcased.

Most of the work in this exhibit display animal qualities, whether it is with string-looking birds from the Ravens Entwined painting by Kenojuak Ashevak or an Inuit woman with a wale tail in Lumaajuq’s story by Ningeokuluk Teevee.

Those prints tell stories, and probably also tales, and are intriguing and beautiful to look at.

Siassie Kenneally’s drawings exude a tongue-in-cheek quality. Her piece Bag of Ice features ice wrapped in a blue bag with a postal code and the Canadian flag on it, but it could also easily be mistaken for a glacier.

Tomorrow, the documentary Kinngait: Riding Light Into the World, directed by Annette Mangaard will be showcased at 2 p.m.

The documentary is related to the Cape Dorset Prints & Painting exhibition because it explains how Cape Dorset, an isolated Inuit community in Nunavut, became the capital of Inuit art (so much that its official website says so).

The documentary looks at how art-making replaced fur trapping in the 1950s and how Cape Dorset became the biggest producer of Inuit art in the world.

It will look at a few generations of artists and how art changed lifestyles. Kinngait: Riding Light Into the World also features arctic scenery and music by Inuit performers such as Tanya Tagaq and Lucie Idlout.

As seating is limited, people who want to attend are encouraged to call the gallery to reserve a seat.

Both exhibitions launched on April 2nd and will be running until April 25th.
The exhibition is a great way to double the fun when looking for great art in the Forest City.

The opening reception is tonight at 8 p.m.

View all posts by Lili Monette-Crepo →
Is Western’s Senate Confident In Their President?
Slices for devices helps reduce toxic waste