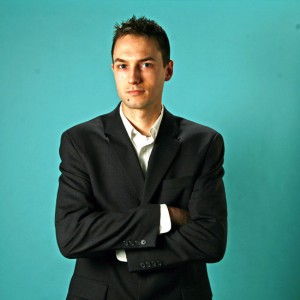 James Mirtle, the man behind the hockey analytics movement. Chances are, you already knew that.

As a hockey writer James Mirtle doesn’t care about being a numbers guy, being the first one to tweet something, or having the popular opinion. For Mirtle, hockey writing is about being right. And his ability to be right over the course of his career is what made Mirtle the important voice in the hockey media landscape he is today.

As the Toronto Maple Leafs writer for the Globe and Mail, Mirtle, a tall, lean man with dark hair spiked carefully with hair gel, has the NHL’s biggest fan base clinging to his every word. So on a home game day, Mirtle is at the Air Canada Centre at 10 a.m. to watch the team’s morning skate that starts a half hour later. After the skate, which typically ends at 11 a.m., Mirtle is in the dressing room interviewing players for his first story of the day. And then depending on which team is in town, he will also watch the visiting team’s morning skate at noon after which he will interview their players as well. After posting his morning story, Mirtle will only have a few hours of spare time before he has to be back at the ACC for the game. He uses those spare moments to grab a bite to eat or even catch up on some sleep. Then it’s back to the rink for 6 o’clock for the pre-game skate. Mirtle covers the game the same way he covers the morning skate. He sits, watches the game, plans his story and then he writes.

“Normally on my deadline I have to file something right before or right when the game ends,” he said. “Last night the game was essentially over before the end so I filed my story at 9:30. And then typically what I’ll do is write a whole new story at 10:45 based on the information I’ve gotten out of the dressing room.”

As soon as the game ends Mirtle stands outside the Maple Leafs dressing room with a gaggle of other reporters waiting to be let in. He spends about 20 minutes talking to the players and then another five at the coach’s press conference. Mirtle said that by about 10:45 p.m. he has everything he needs to file his third, sometimes even a fourth story for his 1 a.m. deadline. In all, Mirtle ends up working a 10-hour shift. And with 41 home games a season, he could be up the next morning doing it all over again.

Throughout the day Mirtle stays connected with his audience through twitter.

“I tweet probably like 70 or 80 times a day. If they [readers] have a question about my story or if they want to know something about the Leafs I try to be accessible,” he said.

With over a dozen other writers and reporters writing about the same thing, the hockey writing world is without doubt a competitive environment. But unlike his colleague and fellow sports writers Mirtle see’s the game differently. He is on the forefront of the advanced analytics revolution in the NHL.

Analytics were first introduced in the blogosphere when the website Behind the Net launched in 2006. The website compiled data, research papers explaining the new fields of measurement and began using those new numbers to evaluate teams and players.

“Some of the stuff that I read there was so interesting because it was so much different than anything I had read about hockey before,” he said

Mirtle spent a couple years studying the theory and learning how to apply it.

“I just saw it over the next three years, that what they were talking about was a more accurate picture of what was happening on the ice. And they were predicting what was going to happen in the coming seasons much, much better than the mainstream media,” he said.

And so when he was hired by The Globe to be the Leafs content writer he began applying what he had learned.

In the 2011-2012 season, Mirtle teamed up with TSN reporter Jonas Siegel to produce a Leafs podcast. Siegel remembers when Mirtle wrote that Leafs centre, Nazeem Kadri had a fluky lockout season and he wouldn’t be able to repeat it again the following year.

So Mirtle crunched the numbers. He looked at Kadri’s shooting percentage, his shot quality, and a lot of the other advanced stats used to evaluate player efficiency.

In the end he was right. A season later Kadri finished with 50 points in 78 games — well below the point-a-game pace from the previous season.

“So I think once a lot of the stuff he said at the time started proving themselves out over time, was when people started to stand up and say, ‘you know what, there’s something to this,’” Siegel said.

This year, The Globe paid to send Mirtle to the annual MIT Sloan analytics conference in Boston where he was asked to address the convention. The Sloan conference is a forum for industry professionals and students to discuss the role of advanced statistics in sports. Hockey is far behind the other big-four sports in terms of how their stats are used to evaluate teams and players. But Mirtle said he’s predicting a major change.

The new stats may lose some fans, but Mirtle said they will revolutionize the way people look as certain players, and evaluate entire teams.

“It’s a big part of what we do and I think a part of why they believe in it is because they believe it’s giving them more accurate portraits of the story and they want be at the forefront of us doing that — of the new technology and new ideas.”

Price/body check: a hockey journalist’s rise to the big game
From Print to Posts