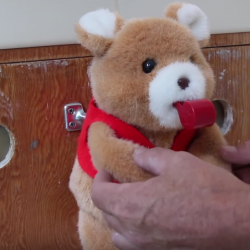 By Latham, Madisyn on October 21, 2016 in Capstone Projects, Story

Mohsen’s Cart was produced by Colleen O’Toole, graduating student of the Master of Media in Journalism and Communications (MMJC) program, during her internship with The Hospital for Sick Children in Toronto. She developed a love for video production during the program which encouraged her to try out her new skills at SickKids.

The video was created for both her Capstone Project and for SickKids’ use on their social channels. She wanted to create a video to shine a light on one of the many behind-the-scenes stories and people at the children’s hospital. Upon hearing her idea, Colleen’s manager pointed her in the direction of Mohsen Wahba, a long-time SickKids Maintenance Mechanic and friend to all at the hospital. With his sparkling personality and giving spirit, Mohsen has captured the hearts of the patients, parents and staff at SickKids, as captured by Colleen in her video.

Check it out below!

Capstone Projects are produced by MMJC students at the very end of the program, as a chance to demonstrate their new skills and explore ideas and themes that interest them. You can learn more about the MMJC program at the FIMS website: fims.uwo.ca/mmjc