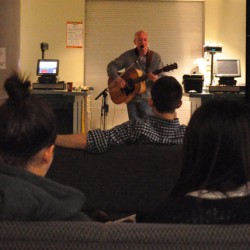 A long long time ago,
I can still remember how,
that music used to make me smile …

The voice of a legend carries the words of the legendary song American Pie across Elgin Hall’s dimly lit cafeteria.

Some curious students in the hall peek in through the windows as they head out to bars for the night, or retreat to their rooms after their exams.

Others inside the cafeteria sit and listen to a man they know nothing about, although he has performed at Western since 1975.

The man and legend is Rick McGhie, and he has come to perform as a part of Elgin’s alternative weekend programming.

Sophs and residence staff alike hope that McGhie’s presence at Elgin will give first-year students who are too young to visit bars, the opportunity to see him in action.

“I’ve never been to a bar, but I imagine it would be a lot louder, punctuated by even more screams,” said Yu.

McGhie’s regular stints at the Spoke on Wednesday nights are usually interrupted by these screams as the bar fills up to capacity at 500 people.

For now, people slowly enter the cafeteria to join a crowd of about 30 frosh, sophs and residence staff already watching the show.

“It’s more like an alternative—something else to be doing at night,” said residence staffer Pat Barretto-Burns, 19, who helped organize the event. Other alternative programming has included Bollywood nights, sex talks and a Harry Potter marathon.

“It promotes community building. They can come down as a floor and really bond over Rick, bond over the experience,” Barretto-Burns explained.

It’s leaders like Barretto-Burns that McGhie depends on to keep tradition alive. “It’s self-perpetuating—anything you do, if it works it catches on,” said McGhie who taught the actions to accompany his music to a group of sophs in 2004—about the same time his son, Colin, worked at the Spoke as a student while his dad ramped up the crowd.

After he taught all the key-shaking, hand gestures, and vocal gymnastics, he has never had to teach it again. Tonight though, the few hollering residence staffers stood out amongst the shy crowd of frosh.

“It’s always hard playing for frosh because they don’t really know me. They haven’t been immersed in the whole thing yet. So I rely on upper-year students to pull the frosh along.”

“I texted half my floor to come,” said third-year soph Ryan Prittie, 20, who sat with one of his frosh. “They’ve seen his poster at the Spoke, but until you go and see him you don’t really understand what the hype is about.”

“I can’t really put it down, but if you sit and listen to him, there’s something about him,” said Prittie. “He’s great.”

For McGhie, crowds have been the same rambunctious crew throughout time—the Western Alumni association has supported multiple country-wide tours for fans of his music—and all it took was the proper music repertoire to get people to join in.

“I dare you not to sing along,” he said to the calm Elgin crowd as he started up Sweet Caroline—a song he’s played since his first job at Huron University College 38 years ago.

“Even when people didn’t like it very much, I still played it,” said McGhie.

Just as he predicted, the small crowd started rocking back and forth, singing “Bah bah bahs” and “so goods” at the top of their lungs.

“There’s always somebody who would like it. Now it’s kind of gone full circle. Everybody likes it.”

Rick McGhie performing at the Spoke.