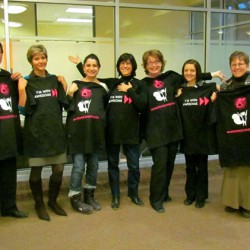 By Emily Leighton on February 12, 2013 in Community

London is experiencing an invasion of awesomeness.  And it doesn’t show signs of stopping.

A local chapter of the Awesome Foundation is distributing monthly grants of $1,000 to micro-improvement projects in the city. The first was awarded last month and the second will be given out at the end of February.

“We’re not closed to ideas,” says Christine Moss, one of the trustees for the group. “We just want awesomeness.”

The foundation was established in Boston in 2009 and has since spread to 61 cities worldwide. According to its website, the organization works to “conserve, sustain, and support the worldwide ecosystem of awesomeness.”

Every idea is welcome and there are only three rules. The grant is not for personal use, it’s not for use by non-profits or charities and the idea must be specific.

“Other than those three rules, there are no rules,” Moss says chuckling.

It’s a concept that has resonated with Londoners.

Awesome London operates with the help of 40 community trustees. Each trustee contributes $100 out of their own pocket every four months towards covering the grants.

“They’re (the trustees) all over the map,” says Moss. “From unemployed to successful entrepreneurs, it’s very much a community-engaged group of people.”

Moss first heard about the initiative two years ago but wasn’t sure people in the city would be interested. She finally put the idea out on Twitter last fall, calling for volunteers.

The response far exceeded her expectations and she quickly found a group of committed supporters.

“The trustees are more than just money. They’re amazing people who have come together to do great things,” Moss says.

And the great things kicked off with a bang last month.

From church choirs to hip hop dance teams, Londoners sent the trustees 41 different awesome ideas in January. The team is hoping for more in the coming months.

“There are just some people that have the wackiest ideas,” says Moss. “And if they just had that one little thing to push them forward, so we thought maybe the money could be that one thing.”

Each month select trustees will narrow the pool of applicants to three. The finalists will then present their ideas at a pitch night.

Her idea to help seniors feel good about themselves through photographs won over the trustees. She envisions using her photography skills to capture portraits of people in nursing homes after getting them dressed up. They can then share their photographs with family and friends, says Woodgate.

January’s winner says watching her grandmother cope with Alzheimer’s inspired the idea. “It’s really the people I’ll be doing it for that will be the winners in the long run,” she says.

It’s this bigger impact that inspires everyone involved with the project.

Katie Van Den Berg, an Awesome London trustee, says the group is hoping to leave a mark that reaches beyond the monetary grant. “The idea is to create positive change in the city and spark innovation,” she explains. The foundation will lend support beyond financial assistance, following up with each winner to help projects develop.

It’s a goal being reached without unnecessary bells and whistles. Just like last month, February’s $1,000 grant will be placed into a decorated brown paper bag and handed over to a local project winner with good will and celebration.

World-wide rallies focus on gender-based violence
Wheels keep on turning, even in the cold