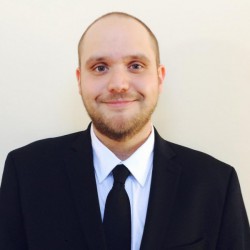 Immediately following graduation from the University of Toronto in 2009, the only work he could find was as a bus tour guide. When that seasonal work ended, he eventually landed in a law clerk’s office, but hated it.

“I just completely despised it,” Drance says now, roughly five years after getting that job. “I spent a lot of my time reading stuff on the Internet – in particular reading hockey content.”

That’s where Twitter came in – where Drance realized his 140 characters often struck a chord with many on the web.

“Over a period of time I sort of started arguing with people, largely about the [Vancouver] Canucks,” Drance says. “And I realized that ultimately I wanted to be engaged in media.”
So he turned to hockey blogging.

Drance began writing about the Vancouver Canucks for Canucks Army, a website started by fans dedicated to the NHL team. Within five months Drance, who was living in Toronto, had taken over the site. Drance doesn’t know the word ‘quit’, often working weeks on end, such as leading up to the trade deadline. (Photo Courtesy Twitter)

However, this wasn’t enough to make a living, so not long after joining Canucks Army he got a job working for a social media company called MTHRTY. It was a full-time gig, but he kept on blogging – even when he maybe shouldn’t have been.

“I sort of finished what I had to do in the day in my first two hours, and then I closed the office door and I’d write about hockey all day,” Drance recalls. “I wrote I think 2000 stories in a two and a half year span … and I found an audience and my Twitter following grew. Eventually I was writing columns as well for the Vancouver Sun.”

That was a few years ago.

In February 2015 he was named Editor-in-Chief of all nine websites under the Nation Network umbrella, one of which is Canucks Army. That is in addition to a column on Sportsnet. Now, he does have a full-time writing gig.

As editor-in-chief, Drance is in charge of roughly 60 paid writers across the nine sites. Most dedicate their coverage to a specific NHL team, just like Canucks Army, but others focus on more general hockey topics, such as Hockey Fights and NHL Numbers (a salary cap website). In addition writers who are paid – either on honorarium, in wages or per article – there is also an ‘army’ of volunteers.

With so many people contributing, Drance is busy around the clock. He expects a minimum of five posts a day per site, or 80 per month. Those expectations have paid off, to the tune of eight digits of visitors per year.

“Whether it’s organizing a story chart or having monthly conversations with the site editors or coordinating with ownership or producing custom content for our advertisers … it’s an involved full-time job,” he says. “I’m never really off. I’m always answering emails – I probably get 60, 70 a day – and it’s quite fun.”

So what does that mean in terms of commitment?

Some of those long stretches came before the playoffs began. Now, with five Canadian NHL franchises in the post-season and two all-Canadian matchups in the first round, it`s pretty clear there won’t be any ‘normal’ 40-hour weeks.

But hours have never been a problem. In 2013 he was briefly between jobs after his social media company was bought and he was laid off. Then he was able to commit to blogging full-time, to the tune of roughly four hundred articles in a five month span. That was in addition to doing freelance reporting on the side.

So it’s not really all that surprising that the most challenging thing for Drance at the Nation Network is not the hours. For him, it’s managing writers from all over Canada. It’s something he experienced – and got used to – when writing for Canucks Army.

“I’m not connected physically with any of my writers in terms of geographically proximity,” he says, “so there’s a lot of telephone conversations.”

In addition to organizing and contributing content, Drance has recently emphasized a bigger focus on daily news editing. The websites may not be the same as a daily newspaper, but that doesn’t mean they can’t be the first ones to get the news, or even provide an alternative point of view.

“I like to try to figure out ways of integrating the latest news so that we’ve touched on it too,” he says. “You try to anticipate stories … [and] a lot of it comes through knowing how to find stories that aren’t being talked about on Twitter.”

But Drance makes it clear that news is not the Nation Network’s niche.

“People come to us for deeper analysis. I think that’s sort of our calling card,” he says. “We’re looking to flesh things out, elaborate on maybe a small story and work out why it’s interesting and what it means in the bigger picture.”

Although Drance has only been the editor-in-chief for a couple months, he has contributed for years, and above all is proud of one thing: supporting young writers.

“We’ve really become – I think – the single best internship in hockey,” he says. “If you want to work in hockey come manage a nation site for a year and you seem to get hired either by an outlet or a team. That’s extremely gratifying to me and that’s a big part of what I do.”

With eight digits in yearly website hits, the Nation Network is clearly doing something right with Drance at the helm.

View all posts by Nathan Kanter →
Moving the state of journalism one story at a time
It’s all in the numbers: A day in the life of Stuart A. Thompson