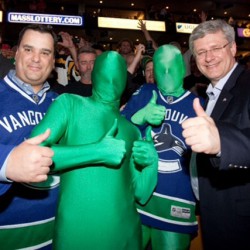 Across from Rogers Arena in Vancouver, in a Costco parking lot, two silky green figures exit a car and make their way to the rink. Known to many in the hockey world as Sully and Force, the Green Men remain faceless and anonymous to everyone in the sporting world.

As the first inductees into ESPN’s Hall of Fans, the Vancouver Canucks supporters are unquestionably two of the most dedicated fans in any of the 30 National Hockey League arenas.

But like many, Sully and Force, who keep their real identities unknown to the hockey world, were angry and frustrated last September when NHL owners decided to lock out their players.

“We both weren’t happy,” Sully said in an interview from Vancouver. “We bleed white, blue and green for the Canucks and they’re in a great position to win the Stanley Cup. So to see the season potentially go to waste was pretty scary.”

Four months later, while at work, Force received a call – letting him know the lockout had ended. 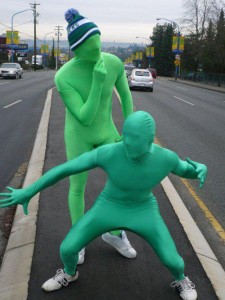 The Green Men, Force (left) and Sully (right), show their true colours on the streets of Vancouver.
Photo courtesy of The Green Men.

“My phone rang and it was the CBC saying the lockout had ended 15 minutes earlier and was it possible for me to come on and talk about it. I started the interview, looked over to the TV in my office and a photo of my spandex-clad face was plastered on the national CBC channel,” Force said. “I was being interviewed live across the country moments after the lockout ended.”

And with that news, the Green Men were ready to suit up for their usual antics at Rogers Arena.

“We are superfans for a reason. While it would’ve been awesome if we could’ve sent a message to the NHL by boycotting the season, we were too stoked that hockey was back,” Force said.“I understand people wanted to show their frustration by moaning and whining, but the fact of the matter is we are Canadian, and hockey is essentially a religion.”

“Regardless of how much the NHL tarnishes their league, Canadian fans will come back and I think the NHL knows that,” he added.

But at least one television set in Ottawa hasn’t seen any NHL action during this shortened season.

“I’m basically trying to avoid them making money off of me this year,” said Mike Denroche.

As a fan of the Toronto Maple Leafs for nearly 20 years, Denroche said the lockout was the tipping point in what has been a frustrating decade for the NHL.

“The owners cried about being broke in 2004, so the players caved and the league implemented a salary cap. Years later, the owners found loopholes in that CBA (collective bargaining agreement) – that they negotiated – and ended up paying players more lucrative contracts than they were prior to that lockout,” Denroche said in a Skype interview.

“This time, it’s the same thing. The first contract that gets signed after the lockout is Travis Zajac – a second-line centre – for $6 million a year for eight years,” he said. “These guys don’t learn their lesson. They put themselves in this position and we get locked out for a half a season. It’s ridiculous.”

During the shortened season, Denroche has refrained from watching games, purchasing tickets, buying merchandise and anything that could constitute support for the league. 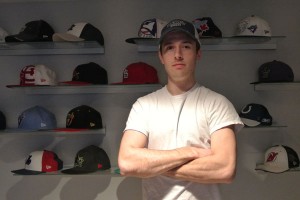 Mike Denroche with his sports hat collection – one that he won’t be adding to this season.
Photo courtesy of Mike Denroche.

“I’m boycotting their website so they don’t get hits from me and hits on their advertisements. If I watch highlights, it’s on YouTube or ESPN because they have no affiliation with the league,” he said.

Although many disgruntled fans displayed their frustrations via Twitter and YouTube leading up to the start of the shortened season, those involved in the coverage of the league knew that many would be back watching games before long.

“One of the first stories I wrote after they got the resolution was that I don’t buy that the fans are going to stay away,” said Tim Wharnsby, senior online writer for CBC Sports.

“I have a theory that we saw more anger and frustration this time than the 2004-2005 lockout because of Twitter. The Internet is that much more prevalent nowadays than it was eight years ago. But I didn’t believe the anger. I felt very strongly that those types of people were few and far between,” he said.

In fact, as the end of the regular season approaches, it appears some markets have actually benefited from the lockout.

“Look at Tampa. They are seventh in the league right now in attendance. They’re at 100 per cent capacity – which is 19,204,” Wharnsby said. “Hockey really struggles in some of these weaker markets from the beginning of the season until roughly early January – usually because of college football and the NFL. But they pick up the casual sports fan after football season, so the timing could not have been more perfect this year in terms of when the lockout ended.”

In addition, there were many intriguing storylines to follow in the NHL this season – especially in Canada, said Wharnsby. The Leafs’ farm team – the Marlies – were coming off an incredible American Hockey League run last year – so it would be interesting to see how their young players performed, he said. The Montreal Canadiens entered the season with new management and a new coach, and the addition of Nail Yakupov and Justin Schultz to the young Edmonton Oilers team came with a lot of excitement.

So how could fans even consider boycotting hockey this season? 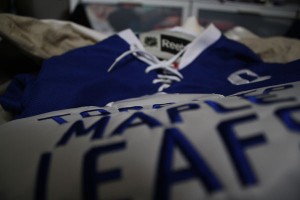 Toronto Maple Leafs jersey, one of many NHL products Denroche is boycotting.
Photo by Andrew Forbes.

“It’s easy to say you’re going to boycott when the games aren’t there,” said Hockey Night in Canada’s Elliotte Friedman. “It’s harder to say when the excitement opens up again, especially if your team is good.”

“I understood what people were saying, but my reaction is always let’s see what really happens. I think a lot of people say a lot of things that they don’t always mean,” Friedman said in telephone interview.

The actual financial effects of the lockout can’t be determined until the end of the season. However, the lockout itself hasn’t left the best taste in the mouths of hockey fans.

“I think that it does hurt that you’re locked out all the time – or at least three lockouts and a strike in the last 20 years,” said Friedman. “It hurts because good people look at your business and say they can’t keep it on the ice. And people are sick of it. When you have to lock out your sport all the time you become a joke. And I think the NHL reached that a little bit this year.”

But both Friedman and Wharnsby agree – league-wide boycotts won’t have any impact on the NHL or the way that it’s run.

“I just don’t think there are enough people who will do that. People are going to come back,” said Friedman.

However, for fans like Denroche, there are certain aspects of the business that need to be changed before they can appreciate the NHL again. This includes the recent conference realignment – approved by the NHL – that will see the Detroit Red Wings and Columbus Blue Jackets move to the Eastern Conference divisions next season.

“The realignment doesn’t make any sense to me – especially coming out of the lockout. It’s just another thing on my laundry list of what I would change or do differently,” said Denroche.

“I still love hockey. Being away from the sport really does affect me. I’d like to be an NHL fan again – it’s not something I want to get away from. But I’m not going to spend my time on a product that I’m not happy with.

“Loving the sport versus loving the professionals – as I’ve grown up I’ve learned that they are two very different things. I don’t think I’ll ever not love hockey, but the NHL?  I don’t know. We’ll see.”

As Denroche takes a timeout from the NHL, there are two fans in Vancouver who disagree with him and will continue to entertain the Canucks faithful and annoy the opposition.

“If you’re a true hockey fan, you’re going to watch hockey, but if you’re not, then you’re able to just walk away,” said Sully. “I admire these groups who insisted they will never watch hockey again, but I would love to find out, of the people who made that pledge, how many have gone back to watching hockey.”