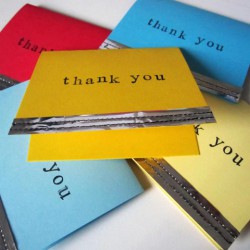 By Mekhala Gunaratne on February 12, 2013 in Business

It started with a bag of potato chips.

Four years ago, Michelle Roberts, 24, began collecting empty chip bags wherever she could find them. From Ruffles to Doritos and Humpty Dumpty to Lays, Roberts envisioned creating a stylish clutch purse from discarded bags.

“I went to a party last week and thank God they had chips. I was so creepy, I said, ‘I’m going to take these four dirty chip bags,’” she explained with a laugh.

From her original idea to create a purse, Roberts decided to expand her concept to include “upcycled” greeting cards.

“Upcycling is similar to recycling but it’s essentially repurposing items. It’s like taking old garbage and using it for something new and better,” she said.

Roberts, a fashion design graduate from Ryerson University, said her passion for upcycling led her to launch Machete, an online shop where she sells hand-crafted greeting cards made from used chip bags.

The creation of each greeting card involves several steps. First, the Toronto-based Roberts rinses the discarded chip bag until it’s free of any oily residue or crumbs. Then, she cuts it open and lays it flat. She uses a permanent marker to draw a shape, like hearts or stars, on the chip bag. She cuts out the shape and sews it onto a card. The cards come in a variety of vibrant colours and sizes. They are stamped with greetings like, “Thank you” and “I love you.”

Although the making of upcycled cards began as a creative outlet for Roberts, it led to a  personal revelation.

“When you cut open chip bags and you lay them flat, even five chip bags, is really, really thick and given how many chip bags everyone goes through it’s actually quite a bit of garbage,” Roberts said.

Chip bags are not biodegradable and cannot be recycled. Instead, they are disposed of in landfills, she explained.

Laura Langevin, eco-designer and co-founder of Echoes in the Attic, an eco-conscious store that sells upcycled handbags, said there is growing awareness of waste management and a trend among consumers and companies toward purchasing and producing eco-friendly products.

“We are taking what would go to landfills off that path and making it into bags,” Langevin said.

Roberts says her next step is to transform her brand into an online global identity. She plans on reaching out to people from different cities and countries via the web and asking them to send her their used chip bags.

“I think once people start collecting their own chip bags…they’d be shocked to see how many chips they eat,” Roberts said. “I recognize that globally we live a really busy lifestyle and I think it’s unrealistic to ask people to change their eating habits 180 degrees, but, at least this can bring conscientiousness to people [by highlighting] the nutritional value…and also the environmental impact of what they’re eating.”

For Roberts, her company, Machete, isn’t just about creative self-expression and promoting eco-conscious living, it’s also a candid reflection of her own desire to find out exactly how she can shape the world she lives in.

“Something that I really struggled with in the last couple months being fresh out of school is, ‘How am I going to make my mark on the world?’ That’s where this comes in. I have a creative outlet, which is super important for me personally and I really do appreciate that I am doing something positive for the environment,” Roberts said.

“This is super fun. I love doing this and it’s great. All the pieces of the puzzle fit together. It is great for the environment and I feel good doing it. Period. It’s that simple.”