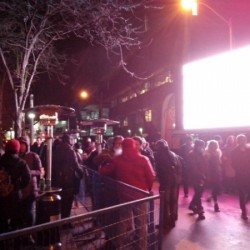 What makes a home?

A roof over your head or a place where you can let your guard down and be yourself?

When New Zealand speed skater Blake Skjellerup arrived in Vancouver, B.C. to compete in the 2010 Olympic Games, he was newly outed, after opening up to his family six months earlier about his homosexuality and his new partner.  But publicly, the then 24-year-old was still growing comfortable with his role in the lesbian, gay, bisexual and transgender (LGBT) community and his status as a high profile athlete. A trip to the Pride House in Whistler convinced the New Zealand native to embrace his homosexuality and to come out publicly.

“[Pride House] had this photo exhibition and all these college athletes from the [United States] who had their portrait taken as out, gay and proud athletes,” he said.

Pride House is an organization that began in Canada with the 2010 Winter Olympics.  It provides a space for the LGBT community to watch athletic competitions, organize events and advocate for their rights.

Their publicly funded Toronto offshoot, PrideHouseTO, was set up in anticipation of the city hosting the 2015 Pan American Games.

Skjellerup and about 30 others watched the opening of the 2014 Winter Olympic Games on a big screen TV set up in an outdoor lounge  by PrideHouseTO on Ryerson University’s campus at the corner of Gould and Victoria streets.

Skjellerup, now 28, says he was bullied as a youth and his peers called him “homosexual” and “gay” before he even knew about his sexual preference.  These schoolyard taunts left a deep impression on him.

Skjellerup believes that Pride Houses can play a vital role in breaking down barriers to the inclusion of LGBT athletes in sport.

“PrideHouse Toronto, and the other 30 or so Pride Houses around the world, are helping closeted athletes and maybe people who just aren’t too sure what it means to be gay or gay in sport and letting them know it is a possibility and that it doesn’t make them any less of an athlete in any way,” he said.

“It is about saying: ‘Hey, there are LGBT people in sport and we’re very proud of who we are; we’re strong and we’re confident and you can be too.’ ”

But in Russia, athletes have not been afforded the same rights as they were at the Vancouver Olympic Games.  Last June, the Kremlin passed a gay propaganda law making it illegal to spread “propaganda of non-traditional sexual relations” among minors.

And four years after the first appearance of a Pride House at the Winter Games in Vancouver, the presence of a Pride House has been banned in Sochi.  In March 2013, a judge backed a decision by Russia’s Ministry of Justice because it leads “to propaganda of non-traditional sexual orientation which can undermine the security of the Russian society and the state.”

“It shouldn’t be something forbidden because there are gay and lesbian people competing in this Olympics and they have a right to be represented,” said Skjellerup, who missed qualifying for the New Zealand short-track speed skating team by one spot.

“It is 2014 and the Olympic Games are supposed to be a progressive, diverse celebration of humanity, all of humanity, and it shouldn’t be something you should have to hide in today’s society.”

Jennifer Lake, a master’s student in health policy at the University of Toronto, considers herself an ally of the LGBT community and showed up to support some friends who work with the organization.  She said the PrideHouseTO event is a great way to create a forum to discuss the gay propaganda laws in Russia and other LGBT issues.

“I think it is really a great opportunity to listen to everyone’s point of view.”

This is precisely what organizers like Barb Besharat, 32, had in mind when they planned the event.

“As awful as the propaganda laws in Russia are, it has really been an opportunity to highlight the struggles of LGBT people, not only in Russia and the world but here in Toronto and in Canada,” she said.

Besharat says that PrideHouseTO will host a similar affair during the 2014 FIFA World Cup in Brazil that coincides with celebrations of World Pride, an event promoting international LGBT rights, in Toronto.  The 519 Church St. Community Centre will act as the headquarters for PrideHouseTO.  At this location, they will organize festivals, movie nights, receptions and sports activities, such as pick-up hockey games. As someone who worried about the perceptions of his teammates, coaches and the potential of losing sponsorships, Skjellerup understands why many active LGBT athletes choose to remain closeted.

“The last thing an athlete wants to do is lose their position, their funding, because of their sexuality,” he said.

But he hopes that organizations like Pride House can help push these athletes to make sports a more welcoming environment for LGBT people.

“The more open and honest they are to themselves, the greater it is for the movement and the sooner [discrimination] can become a thing of the past,” he said.