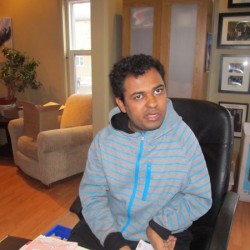 By Kaanayo Nwachukwu on March 26, 2013 in Community

It’s a gloomy, wintry day and Negassi is sitting behind a compact, medium-sized office table.

With a cheerful expression on his face, he alternates between sorting and shredding mail and greeting people who come into his office at the Epilepsy Support Centre, asking, “How may I help you today?”

With slightly shaky hands and a little upturn of the mouth that breaks into a gentle smile, Negassi’s concentration is deep. It’s difficult to tell he has had epilepsy all his life and is receiving medical treatment for the condition.

But that doesn’t stop him from working three days per week.

“Being a person with epilepsy has not allowed me to obtain a steady, full-time job,” said 20-year-old Negassi, who preferred to use only his first name. “In fact, this is my first job ever.”

Other than greeting people and sorting mail, Negassi also helps with cleaning his workplace and taking the garbage outside.

Before he got this job, Negassi stayed home doing nothing.

“Some employers look upon my epilepsy as a reason to not hire me,” he said.

It is because of people like Negassi that the Epilepsy Support Centre – a not-for-profit organization that is specifically concerned with the non-medical welfare of people with epilepsy – is hosting a fundraising gala in April. The event, called the “Proud Peacock Gala,” is slated for Saturday, April 6, from 6 p.m. to 1 a.m., at the Hellenic Community Centre, 120 Southdale Rd. West.

“This will be a formal and festive event with dinner, live entertainment, a candy bar, loot bags and a silent auction,” said Rochelle Sorzano, the public education coordinator at the centre. “And we are doing it to raise money to help raise awareness about people living with epilepsy.” 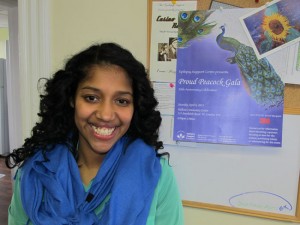 For Negassi, getting a job was not the only challenge he has faced as a result of his medical condition.“Another goal I have not been able to attain is that of living on my own,” Negassi said.

Because he doesn’t have a driver’s licence, Negassi must ask for a ride or use public transit – which he is apprehensive about.

“As a person with epilepsy, I don’t feel that people know enough about first aid, what with the myth about putting something in the mouth of a person having a tonic-clonic seizure,” Negassi said. “So I feel uneasy going out in public by myself because if I were to have a seizure, how would someone know what to do or would I be left there alone?”

So to accommodate Negassi’s transportation needs, he and his family must coordinate their schedules to ensure there is no overlap in people going to places at the same time.

Negassi is one of several hundred people who benefit from the services of the centre, which serves London-Middlesex, Sarnia-Lambton, Elgin, Chatham-Kent, Oxford and Windsor/Essex counties.

“Although the gala will be held in London, it is being sponsored by local businesses and volunteers from all of these counties,” Sorzano said. “So it makes sense that the proceeds raised in each community will stay in each community.”

With tickets going as low as $1 per person, the event’s goal is to attract enough people to be able to raise $30,000 to be used by the centre to fund its public education program.

“Our public education program involves mainly going to grade 5 schools to teach young people in the area about epilepsy and seizure first aid,” Sorzano added. “None of the 30 grand will go towards our support program since that is being taken care of by personal donations.”

There are about 1,200 people from London and surrounding areas who acknowledge they have epilepsy and are associated with the centre, according to Sorzano.

“Our goal is to enable people with epilepsy to fully participate in all aspects of community life,” she said.

For Negassi, that goal can only be realized when people start getting rid of the stigma they associate with epilepsy.

“The only way they can do that is to understand it,” he said. “To understand it, people need to know that this is a disorder people can’t see like a broken arm. It is truly a hidden disorder and we need to talk about it.”