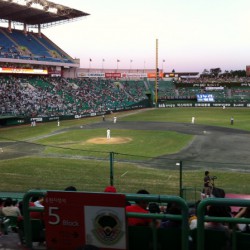 The grass is just as green.

The fans are just as loud. The beer is just as cold.

But after that the differences start to become more apparent: spicy rice cakes and dried squid are the snacks of choice, the ball is slightly smaller and every Monday is an off-day. Riordan warms up in the bullpen for the LG Twins.
Courtesy of Cory Riordan

Welcome to the Korean Baseball Organization.

The KBO, founded in 1982, has allowed foreign players to play in the league since 1998. Beginning this season, each team is allowed to have three foreign players – one more than previous years – but only two are permitted to play at any given time.

This addition of extra roster spots for foreigners was one thing that helped bring Cory Riordan to the Seoul-based LG Twins.

The 2014 season, which starts later this month, sees another significant change for Riordan and other foreign players in the KBO: the salary cap – which had been at US$300,000 – has been eliminated. Although there was a salary cap on the books in previous seasons, it was widely reported that many teams ignored it, sometimes paying their foreign players close to US$1 million.

Riordan, 27, pitched seven years in the Colorado Rockies organization, including parts of three seasons in AAA – one step below Major League Baseball – before deciding to make the move to South Korea.

He was a free agent after the 2013 season and was hoping for a contract with an invitation to major league spring training. The Cleveland Indians showed some interest, but Cleveland didn’t end up being the right fit for Riordan, a Killingworth, Conn. native.

In early December, he was contacted by Andre Park, a U.S.-based scout for LG.

“I had talked to Andre two summers ago and one summer ago, but it was kind of just flirting,” Riordan said.

With an extra roster spot available for a foreign player, LG moved quickly to bring Riordan into the fold.

“It happened all in a matter of three days,” Riordan said via Skype from Seoul. “I went out to L.A. and took a physical, negotiated a contract very quickly and here I am.” But it wasn’t straight to Korea for Riordan. He joined LG for spring training in Arizona, which helped him ease into his new team without being immediately thrust into a totally different culture.

From Arizona, it was off to Japan for the final part of spring training before heading to Seoul to get ready for the regular season.

He says he’s enjoying Korea so far, but didn’t think he’d ever be playing in this league when he was drafted by Colorado in 2007.

“No, not a chance (that he would play in Korea)… You don’t understand how tough it is to make it,” said Riordan. “You think that because you got drafted, you could go play in AA right now and be knocking on the big league door, but no, it’s a long process.”

When Youman won a College World Series with Louisiana State University in 2000, he didn’t think the KBO was in his future either.

For the 34-year-old Youman, 2014 will be his third season in the KBO, all of which he has spent with the Lotte Giants. Lotte play its home games in South Korea’s second largest city, the southern port city of Busan.

Although Youman and Riordan will both be pitching in the KBO this year, Youman, who grew up in New Iberia, La., took a much more circuitous route to get there.

After being drafted by the Pittsburgh Pirates in 2001, Youman made it to the big leagues late in 2006 and stuck around with the Pirates organization until the end of the 2007 season.

From there, Youman bounced around in the Philadelphia Phillies system and in the independent Atlantic League until he got some interest from a Taiwanese team in the winter of 2011.

Youman played one year with the Lamigo Monkeys, but he knew he didn’t want to be there for a long time.

“I got the chance to go to Taiwan hoping to get the opportunity to get to Korea or get to Japan,” he said. “The opportunity to come here (Korea) or Japan was the whole plan when I signed with the team in Taiwan. It was a long road but it all worked out in the end.”

Youman didn’t have the best of times in Taiwan and, despite his desire to get to Korea, was initially a bit wary of coming to the KBO.

“I came in in 2012 and I didn’t really have an open mind because my experience in Taiwan wasn’t all that great as far as around my teammates and around the city,” he said. “I had the impression that all the guys who played ball here in Asia were pretty much the same, but it was totally different. I got welcomed in immediately in Korea.”

After more than two years in the KBO, Youman has adjusted to life in Korea, but not without some challenges.

“The language barrier was a big thing despite having a translator. I mean, our translator’s not going to come home with us,” he said. “And being comfortable with people looking at you a bit funny. They’re not used to seeing a 6-4 black guy in Korea.”

These challenges aren’t surprising to Craig Hall, a sports psychologist at Western University’s School of Kinesiology.

One thing Hall identified as being integral to succeeding in sport at a high level, in North America or anywhere else, is developing good coping skills on and off the field.

“The trick is to take those coping skills and use them outside of sport. Some athletes are able to make that transfer and other athletes don’t seem to be able to do it as well,” Hall said. Youman delivers a pitch for the Lotte Giants in a KBO game.
Courtesy of Shane Youman

Youman has successfully transferred those skills to life off the field. He now really enjoys living in Busan after having learned some of the language and become accustomed to different kinds of food.

One thing he points to as being positive about the KBO is the team-first attitude in the clubhouse, compared to the more individualistic attitudes that sometimes exist in minor league baseball in the U.S.

“In AA or AAA (in the U.S.) everyone is fighting to get that call up to the majors and you might have some individualism there or you might have some cliques here and there,” he said. “But here it’s totally different. Being at the highest level in Korea, it’s more team-oriented and guys get along a little bit better.”

Riordan’s clubhouse experience in Korea has also been more positive than his time in the minors in the U.S.

“Here everyone’s really in your corner, everyone wants you to succeed and the team to succeed. It’s very refreshing compared to a divided AAA locker room where guys have their own interests at stake,” Riordan said. “All they care about is ‘When am I going to get the call (to the majors)?’ and ‘Who cares if this team wins?’ ”

Hall thinks this positive attitude can also make adjusting to life off the field somewhat easier.

“Moving over there, that (a good clubhouse atmosphere) can be seen as a real positive. That’s then going to make the adjustments outside the sport just a little bit more palatable,” Hall said.

As for the boys of summer Korean-style, Youman and Riordan are both happy and hope to stick around Korea for a while.

“It would be hard to sell me a ticket to any other place because I’ve grown accustomed to the culture here and the city of Busan reminds me a little bit of being down in Louisiana,” Youman said. “The only other place I want to be is in the major leagues, but in a really good situation.”

“But if it’s not the big leagues, I’d love to be in Busan again for the next few years,” he said.

Riordan’s line of thinking is similar to Youman’s, despite having only recently arrived in Korea.

“I could see myself playing here for a couple years,” Riordan said. “It’s all about going out and performing on the field.”

“Now that I’m here I absolutely love it. What it is right now to me is awesome, it’s really awesome.”