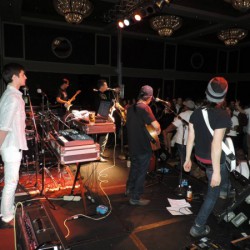 It’s time to rock out, London.

Friday night is the city’s eighth annual Rock for Dimes event, which will take place at the Best Western on Wellington Rd.

The fundraiser, which takes place in 13 cities across Canada, is run by March of Dimes Canada. The goal is to raise money for those living with physical disabilities.

“I think right now we’ve raised $1.4 million across the country,” said Mary Lynne Stewart, the director for fund development and communications at March of Dimes Canada.

“What I like about [this event] is it’s volunteers helping and going beyond themselves . . . and it gives access to people who wouldn’t normally have access with March of Dimes.”

The way the event works is volunteers from local corporations form a band and sell tickets in advance of the show. Some of the bands Friday will be from Price Waterhouse Coopers, Hydro One and the London Police Service. Those funds go toward the organization’s Assistive Devices Program, which aims to provide mobility equipment such as wheelchairs and walkers to those in need.

According to Stewart, having a concert is beneficial because it’s something to which everyone can relate.

“Like every charity, you’re trying to find your moment that makes a difference and helps you get above the clutter,” she said. “Rock and roll is something that comes across every gender [and] is something we can all relate to.

“It’s something that can make you come alive.”

The countrywide event dates back 11 years, when the first concert was held in Toronto.

London’s first event, eight years ago, was held in a snow storm.

That money come courtesy of more than 500 guests. This year they are expecting about 350.

Still, Stewart is expecting to reach her goal. Over 500 people attended the 2014 event (Photo courtesy of facebook.com/MarchofDimesCanada)

Stewart made it clear how important sponsors are.

“Without them, we couldn’t do this,” she said.

Come out and support #RockforDimes #London tonight at the @BWPLUSLamplight Join the fun for a great cause! Tickets> http://t.co/NZyiJWmFKR

An online newsletter can also be found at here.

View all posts by Nathan Kanter →