“Run Like a Girl” Campaign seeks to empower women

“Running like a girl,” isn’t a slander in the sports world anymore, it’s become an empowering message of leadership, at least for Londoners. Social justice group Women & Politics launched a t-shirt campaign March 31st to change the way people think about gender and leadership roles and running for public office.

“We had been talking about really wanting to do some inspiring messaging around the upcoming federal election and really supporting women and young girls to start thinking about themselves in those elected positions,” said Women & Politics board member Suzanne Morrison over the phone Friday morning. 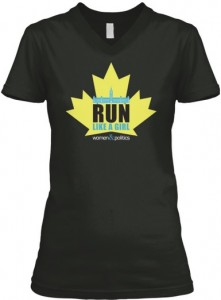 Women & Politics launched the campaign in part to build a small collection to expand their programming as well as send a positive message. Emblazoned with a yellow maple leaf, the shirt says “Run Like a Girl,” below a silhouette of Parliament Hill. They are currently three shirts away from their goal of 50, with a stretch goal of 75 between now and the campaign’s end on April 21.

“We really want to empower women and girls to vote, to volunteer on campaigns, to run, to learn about issues, to have spaces to talk about issues that are important to them in their community. And at the end of the day we want to amplify the voices of women,” Morrison described the group’s motivation.

Women represent only 25% of elected officials across all levels of government in Canada, said Morrison. The United Nations recommends a critical mass of 30% of women in parliament. Since Canada’s population is roughly 50% men and women, it means women are not proportionally represented, nor the issues that affect them, Morrison explained.

This is not because women do not want to be involved, said Morrison, but because there are numerous institutional barriers to women in politics. For example, women are statistically still more likely to bear the brunt of domestic responsiblities, said Morrison. Without support for childcare at home, women might be discouraged to run for office.

Women are also subject to a culture of double standards, where they are often criticized for their appearance, rather than their policies and decision-making capabilities said Morrison.

“It’s those kinds of really backwards notions about where women belong in societal structures that are really quite prevalent,” said Morrison. “It’s not just in politics, there’s this sense that women do not belong in leadership and a lot of people don’t come out and say it, but some people will.”

Morrison gave a recent example of local spoken-word artist Holly Painter, who had a video of her poem on genderization of children published on the London Free Press website. Painter tweeted her work allegedly provoked commenters telling her to ” to sit down, shut up, get a real, paying job, and a husband…”

“When men are raised up and encouraged as being leaders and women are called bossy in similar situations, it’s all of these small examples of double standards that I think really start to chip away at women’s ability to feel confident in those situations,” explained Morrison.

By creating safe spaces to encourage and support women in politics, Morrison hopes their group will build a network and positive social media platform that challenges traditional ideas about women in politics. And the “Run Like a Girl” campaign will help build the funds so they can continue running workshops and mixers where women can discuss issues important to them and tackle these double standards.

“We think it’s a really empowering message,” said Morrison. “We left any London-specific identification off of the design, quite intentionally, we’re kind of hoping it starts to catch on social media outside of London . . . We think that anyone in Toronto, or Winnipeg or Vancouver, would equally love the shirt and the message. So we wanted to make it a little bit universal and not specific to London.”

Get your shirt here.