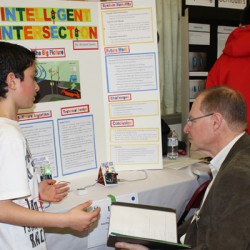 Jessie MacAlpine has a patent pending for an all-natural malaria medication.

The second year University of Toronto student has come a long way since her first science fair project in the seventh grade.

Her mother remembers carrying a fish tank, with some plants and an Alka-Seltzer to the science fair.

“She has always been interested in the environment. She observed and wrote up the experiment of how carbon dioxide affected the plants,” said Kelly MacAlpine from Woodstock.

This was the first time Jessie, then twelve,  took part in the Thames Valley Science and Engineering Fair (TVSEF), where she would place either first or second for the next five years.

Many students will be gunning for the same prize as they show off their projects in the life science, physical science or engineering categories at this year’s 45th annual fair.

The science fair, which begins Friday, will give 314 bright young scientists in grades 4-12 the opportunity to showcase their research projects. More than 26 schools across the Oxford, Elgin and Middlesex region will participate this year.

“We’ve had a huge increase of the junior population, grades 6-7,” says Dr. Patrick Whippey, retired physics professor and chief judge of the TVSEF.

Whippey — who has been involved with science fairs for 43 years– and a panel of nine experts ranging from lab technicians to engineers will be judging the students’ projects.

The idea is to allow children at a young age to explore an interest in science.

“Science is not getting particularly good press in Canada. We live in a society which likes the effects of science but chooses not to really believe it, and that will have long-term implications,” said Whippey.

He says that science fairs like these not only promote scientific literacy, but also offer a spring board for other opportunities as students progress and are recognized by universities.

“It really allows them to really achieve and get noticed at high levels. If you get noticed, you become a candidate for major university scholarships,” he said.

Students that win the regional fair will go on to the Canadian Wide Science Fair held in Fredericton this year, and the opportunity to advance the to Intel International Science and Engineering Fair.

In grade twelve, Jessie Alpine not only advanced to the international science fair, but won gold in the medicine and health category for her all-natural malaria medication that is currently pending patent.

“So far results are showing that its going to be very effective. What’s really interesting is it will be inexpensive and accessible and wildly available,” Kelly MacAlpine said.

Jessie also has a second patent pending for an environmentally friendly herbicide, and is considered one of Plan Canada’s  the top twenty under twenty.

Her mother, who is on the committee for the TVSEF, says that the advantages of participating in science fairs are not often acknowledged.

“The science fair is not as well-known as it should be. Whether you get into science or something else… the experiences you take from it are endless,” she said. “Interviewing skills, people skills and being able to stand up and present in front of others.”

Most of all, she says that science fairs such as TVSEF open the doors to so much more.

“These are the opportunities to give Jessie’s of the world a chance to shine.”