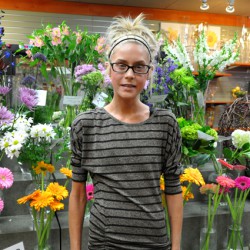 This is almost double what she weighed last June. At 49 pounds, the 26-year-old had seizures after getting out of bed.

Despite this, she still would not eat.

“At that point, you’re not functioning, your head’s not right,” said Moffatt, a London native. “There’s a lot I don’t remember about those times.”

Moffatt has had an eating disorder for 12 years. She has been to four different rehabilitation centres and has been hospitalized four times. According to her doctor, she now has a 60 per cent chance of recovering.

The other possibility is continued hospitalizations, rehab or death.

Moffatt thinks that treatment needs to be more drawn out as it has failed her in the past. She and her mother, Jan Pryde, are advocating change before it’s too late.

Pryde is a chairperson on the board for the organization Hope’s Garden: Eating Disorders Support and Resource Centre and an investment adviser with CIBC Wood Gundy.

“Think of somebody saying to you, ‘you need to double your size over the next four months, and you’re going to be happy with the outcome of that,” said Pryde. This type of “re-feeding,” as Pryde calls the process of reintroducing food into the body, leads to abnormal weight gain—one girl in Moffatt’s unit was put into an induced coma after gaining 30 pounds just in her feet.

The programs, run in hospital settings, require that patients have a low enough Body Mass Index to get into treatment in the first place, Pryde said. They then require patients to consistently gain a certain amount of weight to stay in treatment, she said.

Despite being in and out of treatment since age 19, Moffatt was hospitalized last June after collapsing. She then spent two months in an intensive psychiatric ward, followed by four months of rehabilitation. She stopped gaining weight at 110 pounds, left the program and has since lost 21 pounds of the weight she gained back.

“It’s just like an alcoholic, it’s an addictive disease and once you get hooked it’s hard to let it go,” said Moffatt, who described the process of eating as mechanical. “I was on a pretty huge meal plan, so you know my meal plan is definitely not what it was before. It’s not even close.”

Moffatt says it takes a year to recover, something she is working through by applying to jobs and working for her dad at the optician centre, Eyes on Richmond. Just as eating is a mechanical process, she still goes to the gym every day. “I have to. I think that’s what my brain is saying. I got up this morning and walked there in the blizzard.”

Moffatt’s eating disorder has been accompanied with depression, obsessive compulsive disorder, as well as anxiety disorder. She began going to the gym to escape her living situation and regain control of her life.

“I think intervening right off the bat is absolutely critical,” said Pryde, who hopes to break the silence and warn people of the telltale signs of eating disorders.

Pryde also hopes for better programs and follow up for recovery. She suspects that over $1 million has been spent on Moffatt alone in treatment, citing a $120,000 bill for one of her stays in a rehabilitation clinic in New Orleans, all covered by OHIP.