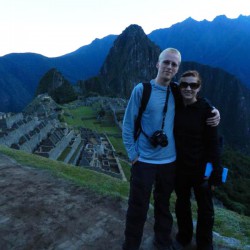 By Karmen Wells on April 8, 2014 in Transitions

For most, a promotion and a new home are the first steps to settling down and starting a family.

But not for Adam Dolman.

Dolman, 26, was recently promoted to a photographer/image specialist position at the University of Manitoba after being an audio visual technician for almost two years. In his new position, he is responsible for capturing moments at various university events.

“I was thinking about it the other day and with working on campus and attending class, most of my life has revolved around the U of M since I began school in 2007,” Dolman said.

In 2012, Dolman graduated with a BA from the university with a double major in film and political studies. He planned to use his degree in film to become a writer and director, he said. But in an extremely competitive industry, it hasn’t been easy to find work.

“I think because it’s seen as so glamorous – and profitable – it attracts a large number of people, but unfortunately there just aren’t enough jobs in the industry,” Dolman said. “Or rather, there aren’t enough of the jobs that people want – because if you want to be a big-shot director one day you have to work your way up for years.”

Dolman has been involved in video production for local Winnipeg businesses and found a couple of production assistant jobs. But it can be hard to find a paying gig, he said. 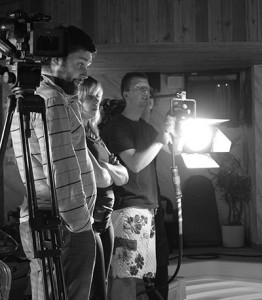 Adam Dolman worked on and acted in a feature-length film called The Assignment about peer pressure, bullying, and conformity versus anarchy.
Photo courtesy of Adam Dolman

“I mean, obviously film and photography aren’t exactly the same, but they share a lot of similarities, and this position will allow me to be more creative,” Dolman said.

Dolman also just moved into a townhouse with his girlfriend of eight years, Alex Kozelko.

The two met when they were both working at Walmart – Dolman was in shipping and receiving and Kozelko was in the shoe department. “She turned me down a couple times but eventually agreed to date,” said Dolman.

And now they both work at the University of Manitoba where Kozelko works in the Centre for the Advancement of Teaching and Learning in Educational Development.

“Adam has worked hard to get to this job…and it’s especially important because he’ll get to work in media and also have the opportunity to hone his skills,” said Kozelko, 26.

Now that Dolman is on a path to his dream job and has taken the next big step in a long-term relationship – you could guess what’s next on his list – but you’d probably be wrong.

Unless you guessed a trip to Belize.

“In terms of priorities, travelling and adventure are way at the top of the list,” Dolman said. “Most of the time when we’re saving for something, we’re saving to go away somewhere.”

They have each done their own travelling before going off on adventures as a couple. Together, Dolman and Kozelko have travelled all across Canada, taken trips to Chicago and Florida, and travelled through Peru and Ecuador for five weeks.

“Despite the fact that flying makes me very anxious, I know that the reward will come if I get on that plane,” Kozelko said.

They’re also both in the process of completing their English as a Second Language teaching certificates so they can teach abroad. And in January, they’re planning a new adventure to Guatemala and Belize to explore the jungle.

“Moving in together will allow us to save more money for travel,” said Kozelko. “This is our way of setting down without really settling down.” 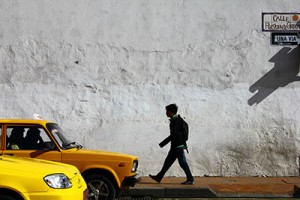 In 2011, Adam and Alex travelled through Ecuador, including the cities of Guayaquil and Cuenca.
Photo courtesy of Adam Dolman

It’s often a toss-up between a life of travel and the family life. But that isn’t a choice these two have had to consider for very long.

“Some of my friends have really rushed to ‘grow up,’ which is great but it’s also tied them down for a few years.” Dolman explained. “But to (Alex) and I, travel and adventure is more important than a mortgage, a wedding or a child.”

But there are still bills to be paid, and with Dolman’s new job, he’ll have a good time doing it.

“Film is my first love and I’d still like to do something with that…but (photography) is something that has really become more important to me in the last few years,” he said. “I always appreciated photography as a visual art, but then I started to do it myself and I really began to take a shine to it.

“It’s just another way of a capturing a story or a moment and preserving it forever.”

And nowadays, he said, since everyone is a photographer with cameras built into their mobile phones, he has to work that much harder to make this new job into a career.

“The need for professional photographers might lessen as the technology gets cheaper and more readily available,” Dolman said. “Just means I need to stay on top of my game.”

But there will always be plenty of photos to take in every new destination he makes into an adventure.

“My hope is that (travelling) will never stop being that important to us. I hope we’ll always be saving for some new adventure.”

Karmen Wells is a devoted prairie girl from Winnipeg, Manitoba finishing a graduate degree in journalism at Western University.
View all posts by Karmen Wells →