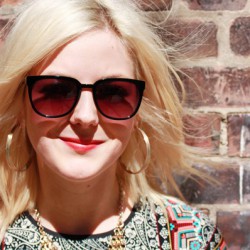 Every Tuesday, Sheena Lyonnais, 28, publishes stories on Blonde Magazine, an online platform that is a collection of personal essays documenting the experiences and thoughts of contemporary urban women.

‘‘I spent so much time writing about other people’s lives that I never talked about my own life, and my own issues, and my own experience,’’ she says. Lyonnais writes original pieces for Blonde Magazine and edits and publishes other writers’ work.

Lyonnais is a good-looking woman with bleached blonde hair recently chopped above her shoulders. Her green eyes sparkle and her lips are covered in red lipstick, a trademark of hers.

Despite her young age, Toronto-based Lyonnais has been working as a writer and editor for several years. When she graduated from the University of Guelph-Humber in 2008, she found it very difficult to find employment. ‘‘I was a freelance writer for a really long time and while I was doing that, I was doing anything but journalism to make money, but then over the years I started to build this portfolio and I had a lot of great bylines. I got from bigger opportunities to bigger opportunities and then I got a job writing full-time’’ she says.

In January 2013, Lyonnais got a job as the managing editor at Yonge Street Media, a weekly online magazine dedicated to innovation and development in Toronto. She worked there for nearly two years.

‘‘I loved that I was fully responsible for planning the editorial calendar, that was my dream. I got to have an editorial vision for something. I got to hire the right people to make that vision come true,’’ she says.

Blonde Magazine was also a dream come true for Lyonnais. In high school, she already wanted to launch a different kind of magazine for women, one that represented issues that she was going through.

Blonde came to be as an Internet magazine because Lyonnais wanted it to be accessible from anywhere and to anyone. Creating a website also meant that production costs were significantly lower.

Lyonnais was fully ready to launch her online magazine in May 2013. She already had experience as an editor of an online magazine with Yonge Street Media, and also as a freelance writer. Lyonnais has written for many publications including VICE, xoJane, Exclaim and The Huffington Post.

Even if Blonde Magazine is a lot of work, it does not generate revenue yet. It is not Lyonnais’s day job and not the only blog that she manages.

She works full-time as a content producer at Kanetix, a company specialized in insurance, mortgages and credit cards. Although it might seem a world away from her journalism background, it is not.

Lyonnais’s role involves writing articles, brainstorming ideas for the marketing campaigns or the blog, participating in meetings and shooting and editing video for Kanetix’s YouTube channel.

‘’Even though it’s not journalism, I’m still using my journalism skills. I’m taking what I learned from journalism and applying it to marketing and it works out really well,’’ says Lyonnais.

Even though the fields are related, there was an adjustement to make because marketing stories are not the same as journalistic ones. Lyonnais explains that for marketing stories, there is a need for the person to do something else, which might be clicking another article or buying a product. But writing for different businesses has its perks. ‘‘I think it actually helped me to become a more well-rounded writer because I’m writing in such a different style than I’m used to,’’ she says.

Lyonnais also had to adapt to the corporate structure at first because she had been freelancing for years, but she eventually got used to the routine.

Penelope Graham works with Lyonnais at Kanetix. As their company runs several brands, Graham manages the PR and content for RateSupermarket.ca and Rates.ca. However, Sheena produces content for all of Kanetix’s other brands. ‘‘She is a content-creating machine!’’ says Graham.

Graham praises Sheena’s work. ‘‘She’s a star in the office, and is known for being incredibly capable,’’ she says. ‘‘She always has an innovative idea or strategy to bring to the table, and is a great resource for others on her team, whether we need proofreading support, a suggestion for an angle, or just an extra hand,’’ says Graham.

Working full-time at Kanetix increased Lyonnais’s interest in online content. ‘‘Our content marketing team is pretty small and I realized that there were a lot of things that were missing, we could do more,’’ she says.

Lyonnais thus got back to school for a digital strategy and communications management certificate at the University of Toronto. She found that the program was perfect for what she wanted to do. ‘‘She is a driving force behind our company’s evolving communications strategy,’’ says Graham.

As part of her certificate, Lyonnais had to start another blog. She wanted it to be about something that she was passionate about so she launched Shevasana, a blog dedicated to yoga and wellness. ‘‘Yoga has such a positive impact on my life,’’ she says. ‘‘I was dealing with a lot of things and I started practicing yoga and it brought calmness to my life, serenity, and brought a community of like-minded people.’’

Shevasana’s motto is ‘‘life on and off the mat’’ and Lyonnais wants it to become this go-to resource about yoga in Toronto. Although she won’t be able to update it as frequently as she has been, she will keep growing it bigger and better, like she does with Blonde Magazine and her freelancing career.

All of this work for one person can be overwhelming. ‘‘With Blonde, working full-time, freelancing, going to school, my regular yoga practice and everything outside that comes on the side like having a social life, going to concerts, being in a relationship, all of these things really overwhelmed me at first and I felt that I had too many responsibilities but like anything else in life, I just learned to adapt, and prioritize,’’ she says.

‘‘Throughout it all, she maintains the loveliest attitude; she’s not afraid to take on hard work in order to achieve her ambitions,’’ says Graham on her colleague and friend.

Lyonnais not only embodies the contemporary urban woman but also personifies a modern online journalist. With a stream of work constantly coming and going, Lyonnais knows how to engage readers whichever media she is working for.

View all posts by Lili Monette-Crepo →

When the levee breaks, go with the flow
Humans @Western: Architecture