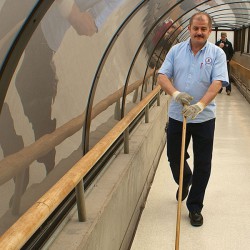 “Ah c’mon baby!” he said one Friday, just before finally snapping it into the socket.

As the light flickers on, Szapiel climbs down and heads back to the storage room with the old light.

Szapiel, 49, is a caretaker in the Don Wright Faculty of Music building at Western University. He left his native Poland for Canada in 1988 and has been working as a caretaker at Western since 1990.

Szapiel is muscular and of average height. When he walks, his steps clink along with the shiny chain of keys he wears on his belt. He has a short, dark moustache and thinning hair and is wearing a light blue shirt and navy blue work pants. He speaks with a thick Polish accent and often gestures with his hands when making a point.

Szapiel’s day starts at 6 a.m. “I come here, sweep the floors, dust the floor.” His morning sweeping duties are most intensive when people enter the building from icy sidewalks.

“In the winter we have to take out the salt or stones from the floor because it can damage the floors and whoosh – the finish is gone.”

Then he wheels out his “Lamborghini” – the name he gives to his equipment cart that holds tools and cleaning chemicals. He moves through each classroom. “I take out the garbage, clean the chalk boards. I make sure (the classrooms) are usable. After that, I start doing the practice rooms.”

Szapiel said the music building has 60 or 70 practice rooms. These small rooms line the hallways of most of the four floors. Inside, students can practise singing or playing the piano. “Practically every room has a piano,” he said. “I just dust them.”

Outside each room is a small metal garbage can. The placement of the cans creates an interesting contrast with the operatic voices and piano notes emanating from the rooms. “Here it’s busy, but it’s nice if you like music,” he said as he walked down the hallway holding a dust mop.

His practice room duties include taking out the garbage, washing the floors and vacuuming the carpets. But Szapiel said that vacuuming is usually done before 9 a.m. Otherwise it’s too noisy when students and staff are around. He said afternoons are slower.

“Most work has to go in the morning. In the morning you have to be quick. You can maybe injure something or pull something. So sometimes I think maybe I should slow down.”

In actuality, Szapiel is far more than a caretaker. You can see how valuable and appreciated he is in the music faculty when he enters a room for students of the Piano Technology Program, a piano tuner training course.

On a wall over a tool bench hangs a group photo of the 2002 class of piano tuner graduates. Szapiel points to it and remembers that group from the first year he began working in the music building. People are central to his job at Western.

He begins chatting to a group of students handling tuning tools. He asks a student how she’s doing. “I’m good!” she said with a smile. The room is full of grand pianos with their lids removed, the pianos’ colourful metallic strings stretching out like giant guitars. As he works, he greets and shakes hands with most students, staff and faculty in the hallways. Just after sweeping the glass-domed walkway that connects the music building with Talbot College, he starts a lively conversation with Jennifer Moir, a voice instructor. “There’s not one person who wouldn’t say Stan is full of positive energy,” she said.

At 2:30 p.m. his work shift is over. But his social shift seems to continue. As he wheels his “Lamborghini” across the ground floor lobby, he spots Jill Sauerteig, a fifth-year cello student with light brown hair and dark-rimmed glasses. They greet each other with the enthusiasm of old friends.

Sauerteig said she has known Szapiel for five years. She’s holding a huge, light-blue cello case that is over half her height.

“I think, more than any other building, the relationships you keep with people [in the music building] are important,” Sauerteig said. “We see the same people every day and everybody knows Stan and thinks highly of him.”

She said a music faculty calendar was published a few years ago and “Stan was chosen over other faculty to be in this one staff photo.”

Szapiel rolls his “Lamborghini” back into the storage room and changes into his street shoes. He said the main thing he likes about his job is when people appreciate his work.