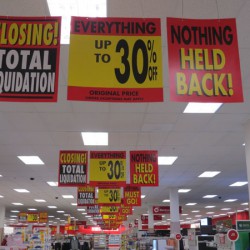 As he had done for the past two years, Brian, arrives at his work at the London Target store in Westmount Mall at precisely 2 p.m.

His entry time is one of the few things of his job that hasn’t changed in the last couple of weeks. Since Target Corporation announced it was closing its 133 stores in Canada, Brian’s daily routine of helping guests, as Target calls its customers, and stocking the shelves, has been replaced by other tasks like putting discount tags on products and rearranging merchandise, so it can be sold quicker.

“Some days it’s very hard going into Target seeing our store not in a clean, perfect state and seeing all those big, ugly liquidation signs everywhere it’s tough,” he said.

Brian, who requested his real name not to be used for fear of getting in trouble with his bosses, is just one of the more than 17,000 Target employees who will be left without a job once the company closes its door. But they aren’t the only people affected by Target’s decision to leave Canada. In the shadows of the failure of this huge retail company, there are also many people who banked on Target’s arrival as a formula for their own success, but never saw that idea materialize.

One of those people is Leo Reyes, who started his first job as supervisor of a company at a juice store at Westmount Mall, and who lost his job after the store had to close due to poor sales.

“Target was always part of the plan,” he said. “The owners of the store thought Target was going to bring many customers to the mall and they wanted to take advantage of it.”

And at the beginning, it seemed like the idea was going to work.

Reyes said that during the first couple of months after Target started operating, his store saw a significant increase in the number of customers.

“We would have more than a hundred customers a day, and most of them were people who had gone to Target and then were looking for something to eat,” Reyes said.

But the magic didn’t last long.

As Target’s customers started to complain about empty shelves and high prices, and stopped going to the store, numbers also started to drop at the juice store.

“We went from… 100… to having only 30 customers a day or less. And most of those people would be regular clients, people who worked at the offices in the second floor of the mall,” Reyes added. “After a couple of months we stopped seen new faces coming into the store.”

And the juice store where Reyes worked isn’t the only venture to have gone out of business at the mall. In fact, over the last year at least three establishments have also closed.

And even though it’s impossible to make Target directly responsible for the fate of these stores–Westmount Mall has struggled for many years to attract customers and keep its spaces leased–many people saw the opening of Target as a new chance for existing businesses at the mall and a great opportunity for newcomers.

“We were all expecting things to be different,” said Faith R., a retail clerk at another store at Westmount Mall, which will stop functioning at the end of this month.

Small suppliers are also among the most hit by the chain’s decision to close its stores.

According to a recent report by The Globe and Mail, Target owes hundreds of thousands of dollars to nearly 2,000 Canadian businesses, which claim to have received orders for their products a couple of weeks before the company filled for bankruptcy protection.

Many of these suppliers are now concerned they won’t get paid what they are owed nor will they get back their products, which they fear will be included as part of the chain’s liquidation sales, the report says.

“Vulnerable small businesses are going to be hurt deeply and so are the people who own and run them,” Lou Brzezinski, a lawyer at Blaney McMurtry LLP representing major suppliers such as Nintendo Canada, said to The Globe. “We have to understand the face of some of these victims are more than just large corporations that can, quite frankly, afford it.”

View all posts by Jonathan Juha →