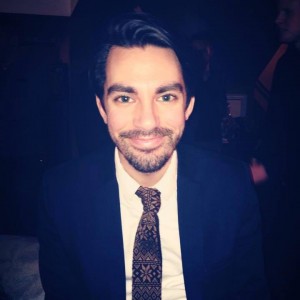 Jesse Tahirali starts his day off like most journalists.

The soft-spoken 26-year-old walks into a dimly lit newsroom filled with television screens and computers. He sits down at his desk to check his email.

Once he’s settled in, he gets caught up on the news of the day – checking twitter and browsing the Internet.

“I only really get my news online and on my phone and computer,” he said.

“A typical day for me changes a lot,” he said.

Tahirali takes on roles that other journalists don’t. Unlike some of his colleagues, he’s got a knack for design. On top of his duties as a writer, Tahirali makes graphics, maps, and interactive features for CTVNews.ca.

He’s currently working on a map for the upcoming elections, he said.

“They hired me as a writer, but when they found out that I could do that work I started doing it more and more.”

In the increasingly competitive online news world, graphics are in high demand, he said.

“Thinking that you just need to write to be an online journalist is a big mistake.”

Tahirali didn’t always think he’d be working in journalism. He pursued an undergraduate degree in what he described as “pretty much the exact opposite of journalism”— physics and mathematics.

Eventually, Tahirali “got bored of doing math all the time.” So, he started volunteering at the university’s student newspaper, The Gazette, as a cartoonist.

Later he worked as the graphics editor for the paper, self-teaching himself how to make graphics. He said it’s something anyone can learn.

“I think a lot of people are way too scared to start learning,” he said. At first, “I had no idea what I was doing.”

Tahirali was eventually elected as the editor-in-chief of The Gazette.

“From there, I decided that I didn’t want to go back to school for science. I’d rather do journalism,” he said.

So, Tahirali enrolled in the masters of journalism program at Western.

“He went out of his way to think of cool ways to do things,” said Copeland.

Copeland said that Tahirali even incorporated his interest in graphics into school projects like television features and news stories.

“He was so creative with it,” said Copeland. “I couldn’t teach people the stuff he was doing.”

Tahirali graduated from the program in 2014, but he made his mark at Western.

Copeland said he has shown Tahirali’s work to current students in the masters program as an example of creative ways to use graphics. Specifically, Copeland showed an infographic Tahirali did for CTVNews.ca after the shooting in Ottawa last year.

It’s his hard work on projects like this that has allowed Tahirali to establish himself at CTVNews.ca.

“I think most people work more consistent hours. But with me jumping between doing graphics and writing, my schedule tends to get a bit more messed up,” he said.

Tahirali sometimes ends up staying at work late as well.

“I did a bunch of WWI maps one time and put in extra time to make sure they got finished before the anniversary,” he said.

“I like my job because the web is a medium you can do anything you want with,” he said. “The possibilities are endless.”

Tahirali does see challenges with his job.

In the online world, news moves very fast. There’s a lot of pressure to get stories online first, he said.

Tahirali makes sure he always double-checks his work.

“You have to be a fast perfectionist,” he said.

“You know people are looking at it right away. It’s less forgiving,” he said.

No matter the challenges, Tahirali believes the future of news will be predominantly online.

“I think every job as a journalist has some aspect online now,” he said.  “I think that’s just the way it’s going to be probably forever.”