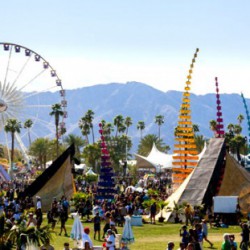 Today marks the beginning of the Coachella Music and Arts Festival, but it also could mark the downfall of the festival once considered one of the best in the world.

What used to be a destination for many indie music lovers around the world is slowly becoming an afterthought, at least in the eyes of ticket holders.

Brendon Michael, a former ticket holder for this year’s event, would fly down from his hometown of Burlington, Ont. to Indio, California annually to attend Coachella.  He met up with friends he met in past festivals, or some of his old high school friends that also made the trip.

Since joining the armed forces in the middle of 2014, Michael was particularly looking forward to this weekend’s festivities.

That was until Coachella released its lineup in early January.

“It’s a bit of a joke,” said Michael of this year’s musician roster.  “[Coachella’s] supposed to be the best of the best – the guys that won’t play anywhere else.  This year I can see almost any of those bands at my local festivals.”

Michael, who had purchased tickets a few weeks after last year’s festival, sold his passes online just days after this year’s lineup was released.

And he’s not the only one.

To put this in perspective, last year’s tickets were selling $100 over face value on StubHub a week before Coachella.

“It’s absolutely about the lineup,” said Michael.  “I don’t care about ACDC, and Drake plays here all the time . . . Last year we saw Arcade Fire who you couldn’t see headline any other festival in North America.”

For years, Coachella boasted some of the best and most exclusive lineups of any major music festival.  The bands that play the festival usually have to sign exclusivity contracts, preventing them from playing other festivals or venues nearby. A venn diagram showing the common bands between three major festivals in the United States.
Photo courtesy of Spin Magazine

But this year, Coachella features at least 35 acts that will be playing one of the other big festivals in the United States.  Drake will be playing New York’s Governors Ball Music Festival and Jack White is less than eight months removed from playing Tennessee’s Bonnaroo Music and Arts Festival.  ACDC is the only headliner to have not played a North American Music Festival this year, but their tour has 44 stops this year, including seven in Canada.

What was once an exclusive club is becoming watered down.

Maybe that’s because of the sheer number of festivals in North America.  When Coachella started in 1999, there were only a few festivals dedicated to rock music.  This year there’s over 40 festivals between now and October featuring at least some of the same artists playing this weekend’s Coachella.

That includes the inaugural Wayhome Music and Arts Festival, taking place just outside of Barrie in July.  And almost 20 per cent of Wayhome’s artists will be playing in Indio this weekend.

“That’s why I bought tickets to Wayhome,” said Michael.  “It’s like having Coachella an hour away for hundreds of dollars less.”

Wayhome is replicating the Coachella experience as much as possible.  Located on old farm grounds, the festival is a three-day even which offers on-site camping – a first for any Ontario indie rock festival.

“It’s more than just the music,” said Laura Kennedy, a representative for the Wayhome promotions team.  “It’s about an experience.  It’s a destination.”

And they’re not afraid of the Coachella comparisons.  Organizers of Wayhome said in February that they want to be the “the Canadian version of Coachella.”

For Michael and other Canadian Coachella-goers, Wayhome offers a cheaper alternative.

“I’ll miss Coachella this weekend,” said Michael.  “But maybe Wayhome could be our new spot.”

Kill Bill 2: second ‘day of action’ planned to stop legislation
Bringing organic food to the community one box at a time