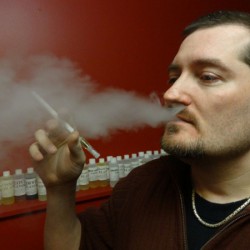 In a basement laboratory, a table is covered with syringes. The wall above is lined with bottles, filled with liquids waiting to be measured and mixed, bold letters written across each container.

Green apple, grape, Earl Grey and dill pickle are just some of the many varieties on hand.

Cylindrical electrical devices of different sizes lie on a desk. Each can easily be loaded with cartridges of liquid mixed in this room.

Craig Smith picks one up, and with the push of a button, and a slow inhale of breath, a thick haze of vapour – most definitely not smoke – soon hangs in the air.

Welcome to the world of “vaping” and the controversy surrounding it. This lab, as he calls it, belongs to Smith, owner of the London electronic cigarette business NoIfsAndsOrButts.ca, a company he started two-and-a-half years ago.

The e-cigarettes he sells are also known as personal vaporizers and, while they range in sophistication, consist of three basic parts: a cartridge, a battery, and an atomizer.

The cartridge is filled with a solution of propylene glycol, vegetable glycerin, food flavouring and sometimes nicotine. It’s then attached to a device containing a battery, which powers a metal coil known as an atomizer. The atomizer heats up the liquid inside cartridge and turns it into a vapour, ready to inhale.

“There is nothing complicated about these,” explains Smith. “It’s just something that generates flavoured steam.”

Those who use e-cigarettes call it vaping – because you aren’t actually smoking anything. No tobacco is involved, so e-cigarettes don’t leave a lingering smell. But perhaps most enticing to the growing number of users is a delivery system for nicotine without the carcinogens found in traditional cigarettes.

Smith decided to get into the business of selling vaporizers full time after a roommate brought home an electronic cigarette several years ago.

Using the e-cigarette, she was able to kick the habit.

“The thing was overpriced and the cartridges were non-refillable and the flavours were terrible, and everything else, but the thing still worked,” said Smith, a non-smoker himself.

“And that got me kind of curious about it. These people I had been trying to encourage to stop smoking for a long time, and had no success whatsoever, all of a sudden started falling like dominoes,” he said.

Smith now offers 53 flavours of “e-juice” for the vaporizer connoisseur. They range from flavours designed to mimic different types of tobacco, to more unique offerings such as kettle corn popcorn, waffles and syrup, and even garlic.

“Garlic flavour is the most bizarre one we have. A guy came to me and specially requested it. He liked to vape garlic, I guess,” said Smith.

For many in the vaping community, e-cigarettes seem like a no-brainer for those wanting to quit smoking. E-juice is much cheaper than a traditional pack of cigarettes, and the cost goes down considerably if you use refillable cartridges.

Not only that, it’s argued by many in the e-cigarette community that they provide a safe alternative to smoking, delivering nicotine into the body through harmless vapour, while mimicking the feel and movement of an actual cigarette. Some of the many types of food flavoring mixed into e-liquid line the wall.
Photo by David Ingram

On its website, Health Canada advises people not to purchase e-cigarettes “as these products may pose health risks and have not been fully evaluated for safety, quality and efficacy by Health Canada.”

It is illegal to sell e-cigarettes in Canada if the e-liquid contains nicotine; it is also illegal to make any health claim or promote them as a stop-smoking method.

Smith makes no secret of his disdain for Health Canada’s handling of e-cigarettes.

“Health Canada has tried a couple times to shut me down and I’ve told them the same thing every time – fuck off, or take me to court. I’m still here,” he said.

Smith himself doesn’t sell e-juice that contains nicotine, but notes it is easy enough to acquire for those looking for it. He also feels any concerns over his ingredients, which he says are all approved for human consumption, are unfounded.

“It’s no different than the ingredients in a 7-11 Slurpee, and you don’t see a ban on those,” he said

And, as for the concerns of nicotine in e-juice, Smith says any ban on e-cigarettes with nicotine should start with a ban on cigarettes themselves.

In Smith’s opinion, Health Canada’s policy against e-cigarettes is based more on a fear of lost tax revenue from a shrinking cigarette market than on sound research.

Chris Haromy, a respiratory therapist with the Ontario Lung Association, often receives calls from people looking for information about e-cigarettes. He notes a number of concerns by health-care professionals due to a lack of research and quality control about their contents, with or without nicotine.

“It’s a difficult situation because they’re not regulated. When something isn’t regulated, and you’re a health-care professional, you can’t really start recommending something when it hasn’t been tested to actually work,” said Haromy.

There are more concerns Haromy and others hold as well, including fears of e-cigarettes and their array of flavours acting as a gateway to youth smoking.

As for the question of e-smoking as a cessation device, similar to the nicotine patch, he notes that nicotine is considered a drug in Canada, and caution should be taken.

“Having said that, if someone calls and said they smoked for 20 years, and they quit smoking using the e-cigarette, we are not going to say that’s terrible,” he said.

“However, it’s not really fair to let (e-cigarettes) be used as a drug delivery device into the public until it has been tested, and I assume in the future it will be tested, and perhaps show to have some benefits towards quitting smoking,” he said.

Jeff Oakes works at the Organic Traveller, a marijuana paraphernalia store in downtown London, and also happens to be a medical marijuana user. He explains that marijuana vaporizers vary in how they work, but using a certain temperature isolates the THC from the plant into a vapour that is smoother on the user’s lungs.

“When you’re smoking it, you get the medical benefits, but you also get the tars and stuff from the plant,” he said. “This way, it heats the air up enough and vaporizes the THC from the outside of the plant, but leaves it alone.”

Hand-held vaporizers similar to e-cigarettes have also been used to consume different refined forms of concentrated THC extract and have gained prominence in recent years.

So what is Health Canada’s stance on the best way for consuming medical marijuana?

According to its website, Health Canada notes that dried marijuana is typically consumed orally or inhaled and does not recommend that medical patients smoke the plant.

However, licensed medical producers are only able to sell their marijuana to patients in dried form, and aren’t permitted to sell pre-made edibles or purer refined forms of the plant.

“Health Canada doesn’t know anything, about anything,” said Oakes.

In his opinion, the best way to orally digest THC is in refined forms mixed into edibles, rather than in raw form.

“They think you just take the ground-up stuff and just throw it straight into your food,” he said.

Health Canada does offer some insight to doctors on how patients can best administer their medicine, “marihuana” as they call it, in its dried form.

“Some individuals use their dried marihuana with a vaporizer or in teas,” reads the Health Canada FAQ page.

That is something at least Oakes and Health Canada can agree on.

“I think vaporizing is the way of the future for sure,” he said.