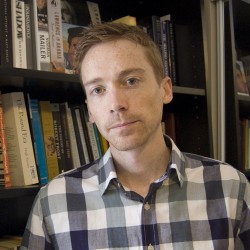 It is no secret that the world of news reporting is changing form rapidly thanks to the Internet. For one of the Edmonton Journal’s web editors, Stuart Thomson, this makes his job exciting.

“I think the best part about my job is there is no normal day,” he said over the phone from his desk at the Journal.

Everyday Thomson comes in, there’s a new viral story, or something is breaking that requires updates, photos and videos constantly. It’s his responsibility to feed the Journal’s website with this new material. He’s also responsible for coming up with innovative ways to deliver the content and making sure it’s relevant in the digital world.

“I don’t think anyone knows how to do things on the internet and maintain your integrity as a publisher and still make money.”

This challenge is not just for the corporate heads, but for the journalists who produce content for these websites. If people like Thomson do not keep coming up with fresh new ways to deliver content, news becomes dull and irrelevant in the fast paced world of internet consumption.

Because of this, you need to be able to work under pressure, said Thomson. He says multimedia journalism is not a job that requires a lengthy education, and perhaps maybe “just anyone” could do it. But those “just anyones” need to have specific skill sets that enable them to produce far more content, in far more forms, than a journalist would have been asked to twenty years ago.

“The thing that you definitely need is you need to sort of maintain your calmness, because when things break they break immediately on the web.” he added.

Strong writing and verbal communication skills are integral. Photo, video and editing skills are no longer necessarily considered an asset, but a requirement. It’s people who can also embed tweets, create multimedia web pages and who have an eye and an ear for newsworthy content that lives on the web that get Thomson’s job.

“We’re looking for people who understand how that works – someone who doesn’t think twice about tweeting a story or taking out their phone and recording Jim Prentice speaking.”

Multimedia journalists have to think with their technology first. The story’s delivery, be it web, video, audio or visual, has to be cohesive and comprehensive, and you need the right material, in the moment, to make something work as a story later.

A multimedia journalist would ideally get to a scene, or an event and tweet it out. They’re taking photographs, and perhaps a little video. They also need to interview people and already have half the story written in their head by the time they get back to their desk.

The other part of Thomson’s job is to make sure the newspaper is using the “right” technology to connect with the readers, without hopping onto every trend.

“The thing I think that newspapers started to do which was detrimental is they started to panic and jump onto every app that came out,” explained Thomson.

Some apps have long lives, while others are passing fancy, and it’s important to make sure the news organization isn’t going to be investing time and money into the latter.

He used the NY Times photo desk’s Instagram account as an example of a good use of app technology. Instagram’s user demographics are largely people in their late teens, early twenties. By having the account, the NY Times is connecting with this demographic in the way they choose to consume media. The advantage, Thomson says, is in ten years when this age group does start to consume news differently, they will remember the NY Times and how much they enjoyed their Instagram account, and check out the website. This is the type of strategic thinking newspapers need to do, said Thomson.

“We have such limited resources you have to make sure there’s a reason you do it.”

Facebook is another strange tool news organizations use to reach readers. Thomson says Facebook knows content its users share makes the site more valuable to use, and it is an effective way to reach people.

However there are two ways Facebook posts are shared – either organically, based on how interactive Facebook users are, or a paid reach, where the Journal would have to pay to promote their material. Facebook does not make it easy for pages to share their posts organically, as what a user sees is limited due to many factors, including their own news feed settings.

Thomson says if it comes to paying to promote posts, which the Journal has not done yet, it’s relying on a separate company to push the material, and that’s not making the newspaper any money. However it does drive traffic to their site, and you can see the immediate impact Facebook has on how far an article will go, but paying to promote poses ethical and financial problems.

“In journalism it’s sort of a trend to blame the readers and I always thought that was really stupid,” said Thomson. “If you had a fruit stand at the market, and then nobody was buying your fruit, you wouldn’t stand there saying these people are idiots, they don’t know what good fruit is, they go to the other fruit stand, I don’t know why.”

He says at the Journal they’ve proved people are willing to read long features. It’s just a matter of giving the journalists the time and resources to produce work that they are passionate about, and their passion shows through, drawing readers in. Thomson says as print journalists, we’re used to filling holes with 100-word or 600-word gaps alongside advertisements. This changes online and perhaps it is for the better. This way journalists now know people are not interested in reading an 800-word article on mundane topics, but they want rich, stimulating content instead.

For Thomson, creating these features is key to keeping value in journalist’s work online. And it’s people like him, who notice these metrics, notice what works and what doesn’t, who can keep pushing journalism along in the internet-era, instead of letting it fall off to the side.

“You need multimedia newspeople, the whole business needs to be soaked through thinking about the best way to tell the story.”

Janice Dickson: the journalist covering the politicking of Ottawa’s politicians
Kaleigh Rogers: A day in the life of New York’s finest online journalist