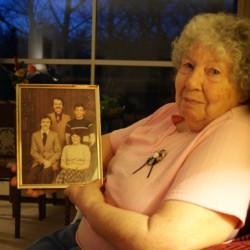 By Mekhala Gunaratne on April 9, 2013 in Health

When the phone next to her bed rang at 2:30 a.m., some part of Joan Johnston already knew the news would not be good — her husband was never coming home.

She was asleep when the call came on Thursday, Oct. 8, 2009. She picked up after two or three rings to the unfamiliar voice of a male nurse.  He told her that Ron, who had been in and out of University Hospital several times since Aug. 18 of that year after suffering from a blood infection and pneumonia, died in his sleep sometime between 2 a.m. and 2:30 a.m.

It was the last time Joan saw her husband alive. Joan Johnston holds a portrait of her and husband Ron in happier times.
Photo by Mekhala Gunaratne.

And so begins his story.

The heart is one of the strongest muscles in the human body.

It delivers nearly 2.5 billion beats in an average lifetime. Until it stops, the heart remains an unflinching, unfailing servant to life. If you listen to its sound using a stethoscope, you will hear that rhythmic lub-dub, lub-dub — this is the sound of reliability, this is the sound of your life — the heart doesn’t skip a beat.

And Ron’s heart was set on entrusting his body to science.

He had made the decision about 15 years ago, soon after Joan retired from her job at Bell Canada.

“Both he and I decided that it was senseless to put our bodies into the ground and spend all that money when it could be used for other purposes,” said Joan.

So they contacted the Body Bequeathal Program, administered by the Department of Anatomy and Cell Biology at the Schulich School of Medicine and Dentistry, at Western University. In the 50 plus years the program has been in operation, it has accepted countless donors for scientific study and facilitated the education of even more students, said lab supervisor Haley Linklater who oversees the program. Cadavers for research are worked on by students in Western’s anatomy labs.
Photo by Mekhala Gunaratne.

Linklater shares her office, room 485, in the Medical Sciences building at Western with 42 other people — all of them stiff, all of them still, all of them cadavers. By now, she’s accustomed to their silent company.

“I’m kind of numb to it except for when I have someone new come into the lab with me. Several people have described the experience as humbling, that there’s so many people in here,” she said. “It’s something most people would never see. But this is my office essentially.”

But before any cadavers are taken to the anatomy labs upstairs, their first point of contact after being transported from the hospital or funeral home is with Linklater or the second lab technician. Upon arrival, each donor is taken to Western’s morgue located in the basement of the Medical Sciences building. They are issued a unique cadaver number to ensure anonymity. Except for Linklater, a second lab technician and the embalmer, the identity of each donor remains a mystery to students.

Once a body arrives it is cleaned and any remaining hair is shaved off within 24 hours by the resident on-call embalmer. The body is carefully injected with a strong solution of formaldehyde, methanol, ethanol and other solvents. The bodies are re-injected with embalming fluid two to three weeks later, explained Linklater.

To ensure maximum preservation, embalmed bodies are placed in the cooler — a temporary home for a maximum of 72 donors. It’s cool in here. The temperature is 4 C, said Linklater. The bodies are stored in white body bags and laid horizontally on long stainless steel tables, “almost like stacked bunk beds,” only they slide out like desk drawers.

After cooling for several months, the cadavers finally make their appearance at the beginning of the school year in the anatomy labs upstairs. There are two labs connected by a single doorway and Linklater’s office is in the corner of the larger one. Both labs are temperature controlled between 15 C and 16 C. The first has 27 long stainless steel tables and the second has 14. On top of each table is a white body bag. Zipped inside is a cadaver.

And so began Ron’s life after death.

It was from one of these tables that Ron taught his students – the ones he granted permission to poke, prod and disassemble his body. When he was alive, Ron was a printer. But here, lying in the lab, he was a patient and committed teacher. And although he’d never get to know his students, they’d get to know him. This laboratory was his classroom and his body was the lesson.

“I think the families of the donors like to think of them as fulfilling their wish of being a teacher,” Linklater said. “Dr. Peter Haase (a professor emeritus at Western) once said. ‘Whatever their professions were in life, you can add one more.’ They’ve been a valuable teacher to hundreds of students who will carry that on and teach other people what they’ve learned from this donor.”

For students learning anatomy, each donor is a precious gift.

On their first day in the lab, students are told to treat each cadaver with the utmost care and respect — these will be their most valuable teachers, said former clinical anatomy doctoral student Ngan (Ann) Nguyen. Since 2006 she’s worked with countless cadavers while completing her graduate studies at Western.

Her first lesson as a student was in surface anatomy — locating anatomical features on the body that can be studied without dissection, like where to get a pulse or where to puncture for a needle, she explained. Next was internal anatomy.

“This is when we have to open the body up,” said Nguyen.

She explored each region of the body, beginning with the thorax and musculoskeletal system followed by the abdomen, head and neck. Humans are generally built the same, but no two bodies are exactly alike. Each possesses its own idiosyncrasies and using cadavers allows students to compare disparate regions of the body – something you couldn’t do as well with textbook or computer-generated representations, she said.

Learning from cadavers has been a privilege for her.

Come April, the lessons come to an end.

Students put away their scalpels and the cadavers are given respite. Their remains are cremated and either returned to the family, if requested, or interred in June or July at Woodland Cemetery. In May a student-led memorial is arranged at Labatt Hall at King’s University College.

Ron was one of 61 donors commemorated at the memorial on Saturday, May 7, 2011. The service began with a processional hymn and welcoming remarks by Marjorie Johnson, assistant professor at Western’s department of anatomy and cell biology. Towards the end of her remarks, Johnson paraphrased a student’s letter she felt echoed the sentiments of everyone who was graced by the presence of a cadaver.

“While working on the arm in the lab one day I realized I was holding his hand, except it was more like he was holding mine and telling me — it’s OK, I am here for you.”

Without a doubt, Ron, too, was here for his students.

Some students, the ones who worked with the cadavers, stood up one by one to recite a heartfelt letter expressing their gratitude to the donors and their families. Donors who have bequeathed their bodies to scientific research at Western are laid to rest and commemorated at Woodland Cemetery.
Photo by Mekhala Gunaratne.

At the cemetery, there is a simple grey gravestone, usually surrounded by a garden of flowers in spring and summer. It honours Ron and the countless other donors who bequeathed their bodies to scientific research at Western.

The human body, like a human life is intricate, delicate and complex. In life, Ron was a devoted husband, a loving father of six children, a caring brother and a thoughtful friend. In death, he was an invaluable teacher to many.

Ron’s was a life well lived and a death well spent.

Thumbing a ride–online
Robopocalypse Now? Not so fast