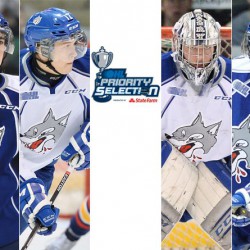 Despite declining enrollment numbers in the sport of hockey there are still over 600,000 kids under the age of 15 who play hockey in Canada. This year alone there are over a thousand players eligible for the 2015 Ontario Hockey League Priority Selection draft. Most hockey parents dream of seeing their son drafted to a major junior hockey team, but before that can happen they must navigate through the recruiting process.

For the OHL, players are eligible for recruitment at the age of 15, or in the year they will be turning 15 for players with late birthdays. Teams are not allowed contacting players until October 1. On that day any representative from the team, whether it be scout, coach or even general manager, can make the initial contact with the player’s parents first.

“The parents must be contacted first. The team must ask for permission from the parents to talk to the son,” Adam Dennis, director of OHL recruitment, said.

There are restrictions, however, to how many times a team can initiate contact with an individual player. OHL franchises are limited to five phone calls per player. After that, it is up to the player to initiate contact with the team because there are no limits to the amount of times a player can contact a team.

With 20 OHL teams and 15 rounds in the draft there is a total of 300 players taken every year — that’s less than a third of the players on the eligibility list. This year, a struggling Sudbury Wolves franchise will look to reinvigorate their team with the first overall pick in the draft.

Former first overall picks like Jakob Chychrun, Travis Konecny, and Connor McDavid have done wonders for their respective franchises. In this draft David Levin of the Don Mills Flyers is expected to go first overall. He’s a poised puck-handler and very dangerous in one-on-one situations. He, like the rest of the players taken in the first round will almost certainly crack their team’s roster and be entitled to the OHL’s “gold package.”

The gold package consists of the best possible contract perks. In other words, players who receive the gold package are entitled to all four years of their post-secondary education at a Canadian institution paid for as soon as they play their first game. And that includes residence. Sadly, the reality is that the majority of players drafted won’t crack an OHL roster in their first year.

“We’ve had a lot of players come into the league at 16 and done very well, but the reality is there are probably 50 or 60 players at 16 who will make an OHL roster and then for the majority of guys, they will break into the league at 17 years old,” Dennis said.

The rest go back to their junior team of their choice until they are called up.

“And in some cases teams will have an arrangement with players to go to an affiliate team, but the majority they will be going to a team that they decide and from their really it’s the individuals decision,” Dennis said.

And as for their contracts, players who don’t make the cut or don’t receive the maximum deal are forced to negotiate for everything they get.

For the David Levins or the Connor McDavids of this world the road to the OHL and onward is easy. But the vast majority of players drafted don’t fit into that category. Denis said parents should therefore take the time to prepare for the tough road leading up to the draft and an even tougher one right after.