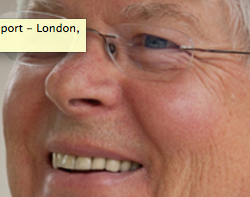 It’s a Thursday night and Phil McLeod sits down at his computer to write a post in his blog. “I have nothing written so far, except the headline. And it’s a good headline,” he exclaims.

This post, McLeod is working on will be featured in the McLeod Report, where 1100 blog posts have been written to date. “It’s fun and I don’t plan on stopping anytime soon,” says McLeod.

Created in 2009, the McLeod Report is a regular commentary on civic affairs in London, Ontario, that features columns three times a week-Sunday, Tuesday, and Thursday nights.

“I am like the official voice for city hall,” says McLeod.

McLeod might be gray haired and middle aged, but his mind and passion for politics is as sharp as ever. “City hall is an incestuous type of place, it’s a small city, about 3,000 people are working there, and it’s a closed environment. When you go poking around, interesting things happen journalistically, but also bad things happen career wise for the people you are writing about. But people have the right to know what is going on.”

The McLeod Report is free. It is written and maintained wholly on being a public service for Londoners. And McLeod would know what it is like to be a Londoner, since he has lived in the city since 1987.

He has always been an active member in the Forest City, as a resident and as a journalist. He was the editor-in-chief at the London Free Press and co-founded a London community newspaper called the Londoner. For a couple of years, McLeod was also a reporter at the Toronto Star, covering Provincial politics. He was an instructor at Fanshawe College, where he taught writing for broadcast.

Today, McLeod continues to blog, appears on CJBK radio about three times a week, and continues to write for London Community News.

For most of his life, McLeod has been an editor, where he was, “giving other people ideas on how to write their stories, and fixing their stories,” said McLeod.

But now, he is back to the basics.

“One of the byproducts of doing this is that I actually now write. Probably since 2009, I have written about 1 million words, that’s more than I would have usually done as an editor, so that’s been quite an accomplishment,” said McLeod.

It has been seven years since McLeod started his blog, but even today he is still surprised by some of its functionality. “There are in this city, lots of people who care, I hear from those people if I have hit a homerun and I hear from them. If I have done something bad, I really hear from them. People do pay attention and care and that is good to know, cause certainly in city politics you get the impression that nobody cares what is going on, but I don’t think that is true,” said McLeod.

The posts featured on the McLeod Report, are thorough and clear. McLeod prides himself on his, “accuracy, professionalism, honesty, and brand.”

“It is not cheap shot journalism and I stand behind everything that I write and I know lots of people who will attest to that,” said McLeod.

On average McLeod has about 1,000 readers.

For McLeod, blogging is not a career. It is a passion. He offers three pieces of advice for new bloggers. “Firstly, you need to understand that blogging is not an easy thing to do. If you are going to do it regularly it is hard work, because after 2-3 blogs you realize the story ideas that you had in your head have been used up, you need more, its hard work in thinking up story ideas, so you need to be prepared to do that,” said McLeod.

His second piece of advice is to, “actually go and do it.” According to McLeod, there is no formula that is correct. Finally, McLeod says not to expect that you will find an audience right away. “You need to figure out how to use Twitter and Facebook and how to use these resources to generate an audience. You have to use some smarts about it, and when they connect, things go well.”

McLeod has successfully made a brand for himself and has exploited a niche market. He advises others to do the same. “There are always people interested in the things you are interested in too. So just go do it,” concludes McLeod.

View all posts by Amanda Whalen →
No Empty Bowls
Price/body check: a hockey journalist’s rise to the big game