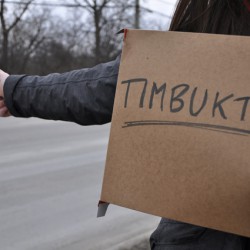 It’s a night clear enough to see the stars as over 200 strangers light a bonfire and settle in for a good old-fashioned campout. But when they lie on their backs and stare up above them, it’s not the stars they see — it’s the thousands of glittering lights of the Eiffel Tower in Paris.

None of them came from the same place, but they’ve all gathered under the tower for one reason. It’s 2008 and it’s the first global Hitchgathering, organized by the online hitchhiking community — hitchwiki.org.

“Two hundred other hippies who are doing the same as you are — you know, travelling by hitchhiking,” said Mikael Korpela, 27, a web designer from Finland, who runs the site with two other people from the Netherlands and Germany.

Hitchwiki.org uses a collaborative community that comments in forums and on maps in order to organize gatherings, comment on which corners of the road are best to stick your thumb out at, and what riders’ experiences are on the road. Riders post planned routes on forums where other hitchhikers tell them the easiest way to go from city to city, or country to country. It’s there that they also plan meet-ups with other hitchhikers to join them on their ride.

Korpela said that online communities, on such sites as Facebook, Hitchwiki and Couchsurfing, help people to connect with others who are interested in hitchhiking the same regions, as well as staying in touch after the ride.

“New people keep coming, of course,” said Korpela about meet-ups like Hitchgatherings. “Then next year you meet them again, and then suddenly you realize you start meeting them all over the world. It helps to connect.”

The site had more than 550,000 visitors in 2012 and more than 190,000 this year alone — meaning that monthly visitors to hitchwiki.org have doubled. There are also plans to make the site mobile sometime in the near future, Korpela said via Skype from Lapland in northern Finland where he had just arrived after hitchhiking from Lithuania.

For most, Korpela said, it’s not only about saving money; it’s about the unique experience it brings them that they won’t get from riding on the bus or in a taxi.

“Imagine you’re in some country like Thailand,” said Korpela who said avoiding touristy bars and hostels is the way to go. “You go to the streets and you ask for a ride to the middle of the jungle — that’s totally the way.”

Jeremy Marie, 29, from France, didn’t use hitchwiki.org while travelling but was able to keep in touch with friends he made in Africa, and met up with them again during his two-month travel across Canada.

“I wanted to meet people when I travelled,” said Marie. He left home at 23 to travel the world via hitchhiking and returned only six months ago.

Marie spent a grand total of $0 on transit — in 1752 vehicles — including as a ship’s crewmember for two months from Cape Town, South Africa to Panama City, Panama — and five and a half years across the globe — all while communicating with an online audience via his blog tour-du-monde-autostop.fr.

But the online community ended up surprising him when he was looking for a place to stay one night in New Jersey as his route across Canada dipped into the U.S. for a brief period. Marie posted a last minute request online for a roof over his head. Jeremy Marie at the starting point of his journey around the world.
Photo courtesy of Jeremy Marie.

“The next day when I stopped to go hitchhike on the way to Washington, D.C., it was raining a lot and I was working to get on the entrance of the highway,” said Marie in a Skype interview. “A guy came and asked if I am Jeremy — he saw my post on the Internet the day before and was looking for me in the whole village to give me a ride because it was raining.”

The man ended up driving 400 kilometres to Washington and back just as a favour to Marie, who said that travelling in the U.S. was more often one of the hardest places to hitchhike because of a more distrustful set of drivers and general laws against hitchhiking.

“People are scared,” said Marie. “Much more than other countries, so yeah that was a problem, waiting three, four, five hours to get a car that will drive you for 20 kilometres.”

This was in contrast to the 1500-kilometre drive Marie once received from the border of Iran to Istanbul in Turkey from a truck driver who knew no English, but spent two days and two nights with him, eventually inviting him via hand signals to dine with his wife and two young kids.

He didn’t have the same kind of trouble in Canada as he did in the U.S., despite similar laws. In Ontario, for example, you can face a $65 fine if caught hitchhiking, according to the Highway Traffic and Safety Act.

Despite this, one of Marie’s more notable trips in Canada was a 200-kilometre ride in an RV on the TransCanada highway — he had made a goal of getting into one while he was in North America.

“I couldn’t get one in the U.S. especially because they are scared. One guy stopped — he gave me a ride actually all the way to a culture fair in Winnipeg, so he took even the small streets with this huge bus,” said Marie, who never received a fine hitchhiking, even with the laws in place.

These types of laws only cover soliciting a ride on the side of the road — your typical thumbs up, cardboard sign approach — but only two people in London, Ont. were fined in 2012, and the law doesn’t include online soliciting such as ridesharing on sites like Kijiji, Pickup pal, or erideshare.com. Unlike hitchhiking, sharing a ride also means sharing transportation costs.

Korpela, who joined Hitchwiki in 2008 after hitchhiking as a hobby for a couple of years, said that ridesharing is too unspontaneous for his liking, and despite it being a safer choice, he could meet just as many interesting people on a bus if he wanted to pay.

For Canadians, however, ridesharing is an alternative to expensive travel costs, while avoiding some of the dangers that hitchhiking might bring.

One grad student at Western University, who didn’t want to be named, now offers rideshares on Kijiji to other students for $20. During the years that he didn’t have a car, he found it more convenient  to rideshare than travelling from Mississauga to Toronto’s Greyhound station for an hour and then sitting on the bus for two hours to get back to school.

“I looked on Kijiji and I found really nice people driving me for $15, picking me up from wherever I wanted, and dropping me off really close to home,” said the student.

Now as a driver, he considers it a safer way to travel. “You know, I don’t fall asleep so it’s actually safe, it’s environmentally friendly, it’s also cost-effective,” he said. “It’s not just for the money. It’s for the company.”

Some of these websites are so organized that they have fixed fares for their travellers.

One of the main differences between ridesharing and hitchhiking, in North America particularly, is that the former is legal. It also gives travellers the opportunity to get their drivers’ information beforehand through the online community and text it to someone in case they end up in a dangerous situation.

Marie, however, says that he only ended up in dangerous situations 10 times through his entire trip around the globe.

“Some people wanted, like, special services from me,” said Marie. “Some of them I jumped (out of) the vehicle, some I just told them to stop and they did and that was it.”

For most people, ending up in that situation once is enough to deter them from this type of travel, but Marie emphasizes that this was less than one per cent of his travel experience over five years.

“I thought (my travels) would only take two years, but I just kept going because I still had money, I still liked what I was doing,” said Marie.

For Korpela, the community around hitchhiking can range from people who just want to try it for half a day to people who live a completely nomadic lifestyle — while still communicating online. He not only works on hitchwiki.org, but also on bewelcome.org – a couch surfing-like site — and trashwiki.org, a site for those who indulge in dumpster diving.

“Imagine there are folks out there who are hitchhiking, who are doing lots of dumpster diving, they are using couch surfing while they are travelling there or Bewelcome, and all that is for no money,” said Korpela, who notes that he’s not as daring as those who travel with little or no money or job. “It’s all about the cultural exchange, the hospitable exchange and helping each other.

“You know, it’s about meeting locals. That’s the magic about it.”

Old churches and new realities
The life of a cadaver