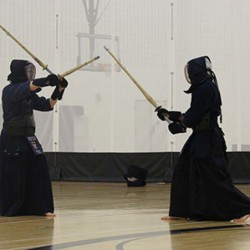 For many Western students, Thursday night is a time to watch TV or start looking ahead to weekend plans.

But for members of the Western Kendo Club, Thursday night is for sparring practice.

At 7 p.m. the recreational centre’s Orange Gym is home to the centuries old Japanese martial art.

As the fighters approach the gym entrance, they stop, remove their shoes and take a deep bow.

“It’s something we do to show respect for our dojo – our gym,” said Daisy Wong, a third-year chemistry student.

Wong is new to Kendo. She joined the Western club, now in its 10th year, in September, developing an interest in the sport through comics.

Along the side of the gym, the fighters place their sets of armour, known as bogu, which are made up of a plastic breastplate (do), thick padded gauntlets (kote), a plastic skirt (tare) and a heavy plastic helmet with a metal cage (men). They meet in the gym’s centre to stretch before they don their equipment.

“It’s about to get a bit loud,” said Wong, picking up her bogu. 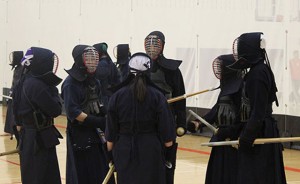 Twenty fighters line up on either side of the gym, each resembling the Grim Reaper with a silver caged mask. Beginners set up on the near side of the gym under the instruction of senior member Andrew Tse and more advanced fighters on the far end. And then it does get loud.

Intimidation is a key component of kendo. Fighters let out a variety of earsplitting and high-pitched screams to psyche themselves up. This is known as ‘kiai’, meaning the spirit with which one meets an opponent.

Striking practice is done on live targets who hold their ‘shinai’ – bamboo swords – above their heads as fighters take turns darting across the floor hitting the target’s chest with swings that could send tremors through a solid oak tree.

Cracks of bamboo whacking plastic echo throughout the gym, breaking up the constant stream of kiai shouted by the fighters.

While kendo may look violent to an outsider, Tse, a second-degree black belt, insists that it’s really no different than any other sport.

“Injuries depend on how much we practise, how hard we go and how well we take care of our bodies,” he said. “Some individuals might not stretch which can lead to greater injury.  The most common ones are the Achilles tendons and the wrists.”

Kendo is a mental discipline, said Tse, noting that the club instructor is in his 70s and still beats everyone up. Keeping injury free is about understanding how your body works and then making it work for you.

Tse said the club draws around 30 students per year but has seen it go as high as 50 in the past six years.

“When I got to university it was the first club that I went looking for,” he said. “It’s a great way to get to meet new people and learn more about the Japanese culture.”

But Tse thinks the biggest draw is getting the chance to get out on the floor to spar.

“It’s very exhilarating,” he said. “As a beginner you see someone taller or bigger than you and they’re yelling in your face. You get intimidated but you learn to stand your ground and overcome your fears. It teaches a lot of great philosophies like that.”

“It’s also a great thing for stress relief and I find it’s applicable to life. For instance, kendo teaches you not to give up no matter how tired you are – keep pushing through,” added Tse.

Stress relief is one of the key draws to the club for new members.

“You’re going into a room to hit each other,” said Wong. “But you develop this strong trust and sportsmanship.”

“It’s not easy. It’s not recreational. It’s serious,” she added. “It’s a discipline, not just a sport but at the same time it’s really rewarding and absolutely worth it.”