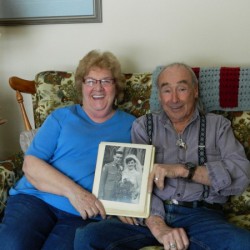 It took their daughter’s near-death experience for Samuel and Patricia Hearns of the Ojibwa First Nation to realize their indigenous culture meant more to them than they thought.

About 10 years ago, the Hearns were at their daughter’s bedside at St. Thomas Elgin General Hospital. She was extremely ill from a cyst on her pancreas. The Hearns sought guidance from an elder, not knowing where else to turn in this trying time. His suggestion was close to what many non-indigenous cultures would say.

“She was very sick and we didn’t think she was going to make it,” the 83-year-old Sam Hearns said. “So we did a ceremony at [the hospital] with the pipe.”

They smoked a pipe and said a prayer to the Creator. The Hearns were told they weren’t allowed to light a pipe in the hospital, but did it anyway. Combining their culture with western medicine was something they had never done before.

This is how it used to be for many indigenous people in Canada seeking medical attention, said Doug George, the health services manager at the Southwestern Ontario Aboriginal Health Access Centre (SOAHAC) at the Chippewas of the Thames First Nation. Hospitals weren’t able to meet the cultural needs of indigenous people because there was a lack of knowledge about aboriginal customs and beliefs, he said. This caused mistrust by indigenous people and doctors alike. 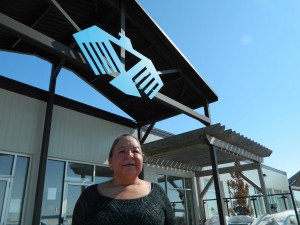 Traditional healer Liz Akiwenzie sits under the Thunderbird symbol at the Chippewas of the Thames SOAHAC site.
Photo by Amy Legate-Wolfe.

But SOAHAC is trying to make it easy for Ontario’s 300,000 indigenous people to get medical attention and still maintain their traditional beliefs. In its 20-year history, SOAHAC has grown from five people serving the London community to over 70 employees. SOAHAC and other Aboriginal access centres, such as the Wabano Centre for Aboriginal Health in Ottawa and De dwa da dehs nye>s Aboriginal Health Centre in Hamilton, served more than 50,000 people in 2014, according to a pamphlet by Ontario’s Aboriginal Health Access Centres. That number continues to grow because of the centre’s collaborative approach between western health care and traditional healers, George said.

The program started this approach after the province interviewed members of the indigenous population in the late-1980s and early-1990s. They found discrimination against indigenous people was common. This kept them from seeking healthcare unless it was absolutely necessary, George said.

Mistrust still exists for many in the indigenous community, who have the poorest health levels in Canada, said the National Collaborating Centre for Aboriginal Health. A lot of it stems from the residential school system, George said.

“We still have people alive in our communities who were students in residential schools. So that’s how recent that time was. And of course they suffered many traumas and abuses,” he said.

In 1994, an Aboriginal Health Policy was implemented by the province under the Aboriginal Healing and Wellness Strategy to address the traumas these families endured and the needs of the indigenous community.

Out of the program, SOAHAC was born in 1995. The group wanted to bridge the worlds of traditional and western medicine and end this mistrust. They didn’t see it as a choice between the two, but that they could work together to create a healthier community. The indigenous population needed to see that their doctors wouldn’t judge them for practising traditional healing, George said.

Elders, nurses and other health practitioners work together to find the best way to meet the health needs of indigenous people.

But the doctors also needed to understand indigenous culture to create a basis of trust, and this was crucial to improving the quality of health, said the National Collaborating Centre for Aboriginal Health. Creating a centre where doctors, nurses, psychologists and healers could come together was the best way to move forward with this plan.

“They wanted recognition of their own indigenous cultural ways and means of healing as a part of their overall health-care plan,” George said. “It’s very important for them to have their own centres to help them assist with that transition.”

Now SOAHAC provides health services for whatever their clients need. They teach the basics like learning how to cook healthy indigenous meals and decrease the risk of diabetes. But they also go beyond, such as offering children with mental health issues and their family a session with a child psychiatrist, social worker, team facilitator and traditional elder to cut wait times.

Along with these components of western medicine, SOAHAC integrates traditional healing methods. Traditional healers offer ceremonies that include the use of drums, singing, praying and burning tobacco, sweetgrass, cedar and sage. They also offer one-on-one meetings with traditional healers or elders, who can offer prayer, guidance and sacred healing items, such as the semaa plant that’s used for prayer, and hawthorn berries which are central to the heart’s system, George said.

SOAHAC’s Chippewa site is now expanding outdoors. Many traditional healing methods take place outside, but right now there are few ways to do this. But George hopes this year that will change when they bring in a ceremonial lodge to allow people to interact with the land while still being close to their services.

“Elements of nature are very important for these ceremonies, fire being one of them. But we can’t make fire inside,” George said.

The information is there, but it’s the education that needs to be passed on, George said. He hopes indigenous people who understand the culture take on more healthcare roles. Training doctors about their culture takes years. More indigenous health-care workers would make it easier to create a basis of trust between doctor and patients.

This is what Western University student Alyssa Gagnon plans to do. 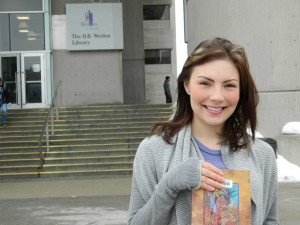 Alyssa Gagnon hopes to start midwife training after she graduates from Western University this spring.
Photo by Amy Legate-Wolfe.

Gagnon is studying First Nations issues, but also training to be a doula. Doulas support women during labour and after birth, particularly for mothers needing help or going through postpartum depression. The 24-year-old wasn’t always connected to her cultural roots as a member of the Cree nation, but this changed when she needed a doula after the birth of her daughter, Arwen.

“I lived with my boyfriend’s parents, and I’m really grateful that they took us in,” she said. “But I just feel that our space to transition into parenthood was a little bit impeded … it was really hard for me to pass around my baby and not just have her to myself in that sensitive period.”

Gagnon went to the indigenous services centre at Western and spoke to an elder for guidance. He told her this was normal, especially in their culture where mothers should use this time to bond with their child.

Gagnon wanted to share this knowledge with other mothers. After her experience with her own doula, she began her training and is now applying to be a midwife. She sees the collaboration of Western medicine and traditional healing as an obvious choice. After all, if someone needs a caesarean section keeping them from the hospital wouldn’t be smart and is not something a doula would do, she said.

“I don’t think western medicine and traditional healing should be seen as two separate things, especially in midwifery,” she said. “Western medicine is there for a reason.”

She witnessed this at her first birth as a doula for an expectant mother who was very connected to indigenous culture.The home was filled with family and friends who sang traditional songs and prayed for the mother and her child.

“There was so much power radiating off of her,” Gagnon said. “It was really beautiful.”

But when the mother faced some problems with the birth, the traditional indigenous midwives calmly said it was time to go to the hospital. The mother had a caesarean section and she and the baby were fine.

George and the other healthcare providers at SOAHAC continue to try and make more opportunities for people like Gagnon and the Hearns who seek their health needs on their terms.

Walking into a brain storming session at SOAHAC on a recent March afternoon, it’s clear the divide between traditional healing and Western medicine is shrinking faster than ever. Nurses, doctors, traditional healers and elders work together to discuss what’s effective with their patients, what isn’t and how they can make things better for everyone who comes in their door.

“It’s okay to live in both worlds and not pull those things apart and decide between them,” George said.

The room buzzes with ideas and bursts of laughter as people share their stories and ask questions. There is trust in place at the SOAHAC Chippewas site, but it’s still needed at other health facilities, said George. Until then, he and others at SOAHAC will help these indigenous communities maintain their health until every healthcare worker in the province can address their needs on their terms, George said.

“This is who we are and this is how we heal,” he said.

Standing up to Depression
Shootings trigger spotlight on police gun use