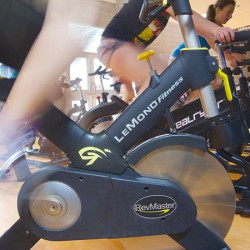 By the time most Western University students get out of bed on a Friday morning, the members of the Western Triathlon Club have already gotten in not just one workout, but three.

Practice starts bright and early at 6:30 a.m., but their morning begins even earlier.

Jacqueline Rennebohm, a third-year environmental health student, woke up  at 4:50 a.m.. She fed her dog, ate a carb-fueled breakfast, packed her bags filled with workout clothes, schoolbooks, and snacks , and then waited for her car pool ride to show up.

As the average student snoozes blissfully on, Rennebohm and her teammates gather in the spin area of the Western Student Recreation Centre.

Friday morning cycle practices are  “just” one hour long, the athletes said as they warmed up on the bikes. Other mornings include a two-hour cycle session that can leave your butt numb and your legs wobbly.

But as the rhythms and rhymes of Jay-Z start to pump out of the sound system and club president Ellen MacDonald leads the team in the first drill, a current of energy runs through the room.

The Western Triathlon Club incorporates three sports into one event – swimming, biking and running. It’s not a varsity team, said MacDonald, and is open to Western students of all athletic abilities and backgrounds.

There are currently 120 students signed up, but attendance at practice is never near that number, MacDonald said.

Every week, there are 10 optional practices for athletes to attend, from pool workouts to group cycles and runs, as well as strength training and yoga to stretch out those tired muscles.

Some of the practices are “bricks” – triathlon lingo for stacking a combination of the three sports one after the other.

An example of a brick workout could look something like this: a 60-minute cycle class followed by a pool session or a 70-minute swim with an hour of strength-training coming on its heels.

“We’re not really sure why they’re called bricks,” Rennebohm laughed. “Either because they’re stacked on top of each other like bricks, or because they make you feel like a brick after.”

There’s also “two-a-days”, on Tuesdays and Thursdays, when both morning and afternoon workouts are offered.

Rennebohm acknowledges that it can sound intense, but she said the club is designed to help athletes achieve their individual goals. “The best part of it is the group atmosphere,” she said. “The goal is to get it in and get it done, and the positive environment makes you feel like whatever your ability, it doesn’t matter, you can do it.”

With three sports to conquer, it makes sense that it’s rare to master all of them, Rennebohm pointed out.

“Some people just learned to swim in the fall. It will vary. Some people are strong in certain areas and a little weaker in others. It’s all about diversity,” she said.

Rennebohm herself is a perfect example of the mixed backgrounds of Western’s triathletes.

After sustaining a running injury in the fall, Rennebohm decided to take a break from varsity track and field.

Rennebohm has cone-rod dystrophy (a type of macular degeneration) and is legally blind. But she has a strong background in swimming and competed for Canada in the 2008 Beijing Paralympic Games where she finished in the top 10 in four events.

Joining the Western Triathlon Club seemed like a fun and challenging way to continue training and to try out cycling, Rennebohm said. She hopes to compete in her first triathlon this summer.

“My team, they have my back,” said Rennebohm in between the final sprints of the workout. And as practice winds down and teammates stop to chat and offer encouragement, it’s clear they really do.

It’s still early, the sun still not creeping above the campus buildings during the Triathlon Club’s practice. Gradually, though, the sky lightens to a pale grey and the campus slowly starts to wake up.

But for Western’s triathletes, the wake-up call was a long time ago. Cycle practice is over, and now it’s time to either hit the pool or the books.