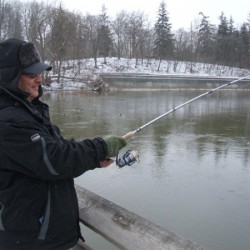 Paul Holmes casts his fishing line into the cold and fast-flowing Thames River. It’s snowing lightly and -6 C, but it feels much colder as wind blows across the river. Holmes slowly reels the line back in, past a small group of ducks squawking at each other.

His lure – a flimsy piece of white, hook-shaped rubber – emerges from the murky water at the end of his line. “I’m using a Mister Twister Tail. It usually works the best. Almost anything will bite on that if they’re hungry,” Holmes says.

Holmes, 50, is a local angler who fishes the Thames year-round in the city. He has been fishing since he was a child. By day, he works in the warehouse of a plumbing company in St. Thomas. But outside the warehouse, he spends much of his time fishing in the Thames, some days for as long as eight hours.

One reason he fishes is to get out of the sedentary lifestyle. “It’s outdoors, you’re not trapped inside four walls. I work for eight hours indoors, you sleep for eight hours – that’s sixteen hours or whatever. Coming here, it’s great,” he said.

Fish are only part of the experience for him. “I learn a lot about nature too. It’s not just fish. I also see otters, beavers, muskrats, deer.” A group of geese paddle past Holmes’ line.
Photo by Blair McBride.

But today he isn’t having much luck. He casts again and reels the lure back in without a bite. “It’s tough because of the winter time,” he says. “Fish are more lethargic, they’re slower and they basically don’t swim as much as they do in the summer time because they don’t want to expend any energy.”

Holmes is standing on a wooden deck overlooking the Thames at Greenway Park. The calls of ducks and geese pierce the cold air along with the sounds of traffic rumbling over Wonderland Road bridge.

The damp, muddy smell of the river mixes with the smoke from his cigarette which he puffs on. He’s wearing a puffy black jacket, blue jeans, oval sunglasses and a black flap cap that covers his ears.

And he wouldn’t be prepared for fishing without his thick, black rubber boots that are necessary for wading into the river. “You need really good boots because of all the rocks that are on the bottom. The arch in your foot – you’ll feel it afterwards.”

As a year-round angler, Holmes may seem like a rarity in London. But the community of dedicated anglers is surprisingly large, said Holmes, who is a member of the Thames River Anglers Association. He estimates as many as 500 people fish the Thames all year, though the number of anglers in the summer is much higher.

With so many people fishing in the Thames, it raises questions about the health of the river. The Thames winds through vast areas of Southwestern Ontario and the city of London, absorbing agricultural runoff, sewage, industrial waste and trash.

But in Holmes’ view, the Thames is a lot cleaner than it used to be. “As far as being safe to walk in it – the garbage, the glass, all that stuff that gets into it – it’s pretty good. And even the cleanups that get done on Earth Day is really good. It’s making a big difference.”

Holmes’ assessment is supported by John Schwindt, an aquatic biologist with the Upper Thames River Conservation Authority. Schwindt says that tests for bacteria and chemicals have shown improvements over the last 15 years. “If you look at most of the chemicals that have been tested over the years, things like metals have gone down. Almost all the other pollutants have gone down with just a few exceptions.”

Even with the pollution and stresses put on the Thames, the fish diversity is still high. “We’ve got records for 59 different fish species, most of them in the forks area (near Harris Park),” Schwindt explains. “When you think that we’ve got – I think it’s around 150 or 160 species in Ontario and over a third of them you can find within the boundaries of London – that’s a pretty remarkable number.” Holmes explains the average length of pickerel in the Thames.
Photo by Blair McBride.

Holmes usually does catch-and-release fishing. But almost every month he gets dinner from the river. The last fish he ate from the Thames was a two-pound pickerel that he caught last November.

Holmes isn’t alone in making a meal of his hobby. Ben Hindmarsh, a management biologist with the Ministry of Natural Resources, says that taking home the catch is not only common but safe. “There’s definitely anglers that just practise catch-and-release, but many anglers like to eat their catch,” he said.  “It’s perfectly safe to eat a lot of species of fish from the Thames. Taste is up to personal preference. I wouldn’t say they taste any different from fish caught elsewhere.”

Holmes casts into the river a few more times, but the fish aren’t interested. “It’s too bad we haven’t caught anything. It’s too cold, or we need more patience.”

He winds up his line and pulls his tackle belt around his waist, then walks back to his car in the parking lot. In a few days he’ll be out by the river again, experiencing nature and finding peace.