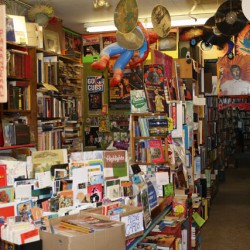 Every morning, Tyler Smith opens the door to a cultural storehouse.

“We’re a place that people come to feel a sense of community. It’s a place of conversation – a place of ideas,” said Smith, manager of City Lights Bookshop.

This sense of community helps maintain the success of used bookstores and withstand the evolution of ebook technology, Smith said.

City Lights has been a part of London’s downtown since 1975.  Inside, books are stacked on shelves from one end of the store to the other – sometimes reaching as high as the ceiling.

“We have this unique, labyrinth-type quality,” he said.  “People like coming in and getting lost in the aisles and the nooks and crannies of the store.

“There is something overwhelming about used bookstores that people love.  It’s that we keep so much.”

“We’re like a museum. You can come in and read books that your dad or mom or grandparents have read,” Smith said. The store, like others around the city, has maintained a place within the consumer market because of the value of its products.

“We’re a success so much so that we are still here – and that’s flying in the faces of the people who said we wouldn’t be,” Smith said.

“There is some work to be done though. We can’t just be happy that we’re still around, but we have to get more people involved in the world that is book reading.”

But what makes the physical form of a book more appealing than its downloadable counterpart?

“There’s history in a used book,” said Bryan Letkemann, a frequent visitor to used bookstores around the city.

“There’s something special about getting a book that’s been passed down from generation to generation,” he said. “You could get a copy where pages are doggy-eared or the spine might be creased and there’s something unique about that.”

There is so much missing from the experience of reading when you don’t have the physical copy, Letkemann said.

“I like to be able to turn the page. I don’t want to have to rely on a battery,” he said.  “What if the power shuts down?  You can’t charge your e-reader, and you can’t read your book.  I’d rather be able to light a candle and read without that worry.”

Big chain bookstores have already taken steps toward promoting the digital versions of books by selling Kobo readers and digital copies of books on their websites.

Used bookstores, on the other hand, don’t have the luxury of selling any type of digital copies. But that doesn’t mean we will see an end to second-hand bookstores or the physical version of books themselves, Letkemann said.

Part of what makes used bookstores different from places like Chapters or Coles is the atmosphere, he said.

“Walking into the store, there’s a particular musty smell of old books.  The floor creaks, but there’s still a sense of order and that’s what makes it appealing,” he said.

“Books are like art.  It’s great to see a photo of the Mona Lisa online, but if you’re not seeing it in person then you’re not getting the full experience,” said Letkemann.  “Someone actually put a pen to paper and wrote those words and you don’t get that when you read it on an e-reader or online.”

“It’s really a crime against art to take away that physical entity,” he said.

But there’s another, more notable difference.

“You don’t own ebooks,” Smith said. “You can’t share it. It’s not yours. And realistically, it doesn’t exist. It’s a copy.”

Physical copies start to absorb and show the personality of their readers, Smith said.  That’s why used books have always been so popular – because they are so telling of their previous owners.

But the future success of used bookstores is going to rely on the buying habits of the next generation, Smith said.

“There’s hope there.  We have young kids and teenagers come into the store.  If they’re reading now, that means they will be reading well into their adulthood.  That means there will be a place for used bookstores,” Smith said.

So what would a world without used bookstores be like?