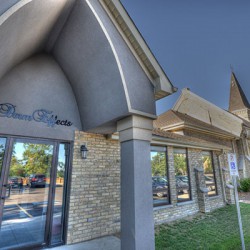 Londoners weary of new high-rise developments and modern box-like buildings around their neighbourhood are benefiting from a growing trend in the city: repurposing churches.

It’s more of a recent phenomenon here, said Don Menard, the heritage planner for the City of London, but it’s been happening for some time in other places.

“It’s … all over North America and often major churches are looking at empty buildings or buildings that are so expensive to maintain that they’d have to give them up,” he said. Generally, the City tries to avoid these churches getting demolished, said Menard.

“Although we would prefer for the church to remain used as church, where that’s not possible, I think it’s preferable to have the building, especially when it has some heritage character … be saved and repurposed to something else,” he said.

Part of the appeal of old churches to developers, Menard says, is “that they do usually have good interior space because they were built for it.”

There are a number of churches – from Catholic to Anglican to United churches – that have undergone this conversion in all areas of London. And it’s becoming more and more common as churches consolidate because of declining numbers of parishioners, said Ward 6 Coun. Phil Squire. The former Church of the Hosannas will now be a medical spa.
Photo by Azzura Lalani

The former Robinson Memorial United Church on Richmond Street, also in his ward, is on its way to being repurposed into a condo by Romlex International Ltd. The project initially caused some apprehension for its surrounding residents.

Squire thinks churches can be repurposed into more than just residential zoning. He says that having businesses in former churches can also add to a neighbourhood without changing its atmosphere.

Dr. Wei Jing Loo, a dermatologist in London, agrees. She chose to restore and repurpose the almost 140-year-old Hyde Park United Church at 1560 Hyde Park Rd. She fell in love with the space when she saw it in 2011 and decided to turn it into a medical and dental clinic. The extensive renovations took seven months to complete and by January 2012 she opened for business.

“Living in the neighbourhood, and absolutely adoring all architecture and history, I decided that, you know, I’m going to save the church and I’m going to turn it into my office.”

Her neighbours are happy with the result, she said, and so are her clients.

Part of the appeal is that Loo carefully maintained the integrity of the building as much as possible. She restored the tin ceiling, used original light fixtures and doors wherever possible and also used the pews as seating in her office.

“A lot of things have been salvaged and reused and repurposed and recycled,” she said. Loo received a Heritage Award from the Architectural Conservancy of Ontario for her work in restoring the church, but, she admits, the cost of restoring an old church is prohibitive and not for everyone.

“It’s a lot of money and that’s probably why a lot of people don’t do it,” she chuckles. “It would have been a lot cheaper if I had demolished the whole place and started from scratch.”

Close to $1 million was spent to make the building work. Costs to the exterior included re-roofing the church and tearing down the bell tower, which was determined to be structurally unsound, and replacing it with a safer one.

Loo’s successful transformation of the former church is in the process of being replicated directly across the street at the Church of the Hosannas, an almost 130-year-old building. The church is now going to be turned into a medical spa.

For some, though, the transformation of their church is more than a physical loss – they lose a community they care for and a support system.

“I think it’s not fair at all to tell you the truth,” said Donald Edward, a former member of the Missionary Church of St. Francis of Assisi which was based at the Church of the Hosannas.

Edward helped replace the bell in the bell tower of the church and helped out with any odd jobs the church needed done. He now feels he’s lost a community he came to know well because of the church’s closure.

“It really hurt me because I actually liked going there. I got away on Sundays and it was something to relax myself,” he said.

For people like Edward, even when their church is set to be repurposed and not demolished, the loss is still great. But according to Menard, it’s much better than the alternative of demolishing an underused church altogether.

“What to do with these buildings has been a concern for the heritage community. The preference is to retain the building, and if it’s only possible by finding a separate use, then do that,” he said. “In some cases, you can get some rather striking adaptations.”

Free scholarship money? Students say ‘no thanks’
Health officials send in the clowns