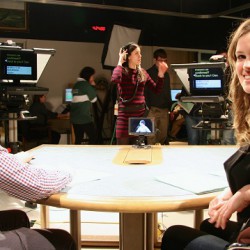 Students in the Master of Arts in Journalism program at Western University produce stories in all mediums – video, audio, print, and online. Here are some of the video stories they’ve produced in their final semester.

There are approximately 4,000 dairy farmers in Ontario. As new barns are being built, farmers are looking to technology and new techniques to help with production. The integration of both are not only for efficiency purposes, but also for humane and ethical farming practices. Amanda Whalen takes a look at how one dairy farmer, in Watford, Ontario, is finding that the more comfortable his cows are, the more successful his farm is.

When was the last time you sent a handwritten letter? What if you could pay someone to do it for you? That’s what one Londoner is doing. Katie Geleff tells us the story of one London woman who is trying to bring back the art of the written word.

A new restaurant in Covent Garden Market may have a fresh look, but its owner has a familiar face. As the City furthers its plan to reinvigorate the downtown core, this longtime London business owner has a few ideas of his own. While it may have been a big investment, at least he didn’t have to go far to make it. Daniel Weryha brings us the story.

Death in the Family by Brendan Murphy

The controversial practice of doctor assisted suicide has recently dominated headlines in Canada. The Supreme Court’s historic move to decriminalize the act was made by a unanimous 9-0 decision in February. However, a number of Canadians have been traditionally opposed to assisted suicide on moral grounds. One such Ontario family has lost three members since last fall, none of whose deaths were quick or pleasant. Reporter Brendan Murphy brings us the story of his own family, in an effort to see whether first hand experiences with the reality of death have managed to shift age-old convictions.

London is home to a large Pride Festival every summer, but a recent survey found that the city’s LGBTQ community feels unsafe and unwelcome. Reporter Emily McWilliams spoke to one London woman, and examined some of the survey results to find out how Pride London is trying to make the city a more tolerant place for everyone.