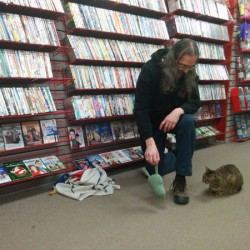 By Clark Teeple on April 8, 2014 in Transitions

The once-ubiquitous video rental franchise has only really been gone for a year or so, a victim of the new entertainment guard like Netflix. With the advent of online streaming and quasi-legal torrenting, one would assume that video rentals in general are a thing of the past. But one rental store owner – and his cat – are the exception to that assumption. Dave Honsberger has operated Entertainment Tonight for over 25 years. Photo by Clark Teeple

“Our biggest challenge right now is that the media has convinced everyone that video rental stores are dead,” said Dave Honsberger, who owns Entertainment Tonight in Strathroy. “We’re jumping up and down, waving our arms and shouting ‘we’re still here!’ ”

Most Canadians still get their movies at video stores. This comes with a huge caveat, though, as 80 per cent of new releases are purchased rather than rented.

“Our share of the pie is a 20 per cent wedge,” said Honsberger. To make things even more complicated, this wedge is split between Netflix and other online rental options, illegal downloads, and rental stores.

It wasn’t always this way. When Honsberger purchased Entertainment Tonight from Strathroy Audio Video on Halloween 1991, the rental business was booming.

“The timing for me was magnificent,” he said. “I had to take out a loan to buy the store, but I had it paid off within five years.”

Back then, film studios sold new releases on VHS tapes for $100 to rental stores. The movies only became available for public purchase after a few months, giving the rental stores time to make a return on their investment. Video player rentals were a significant source of income as well.

In fact, business was so good that even a small town like Strathroy could support several different stores. One such business was Colombia Video. When it opened, Entertainment Tonight’s sales went down by 60 per cent. That is, until they learned to co-exist.

At the time, ET was owned by Don Aiken, who until very recently owned Strathroy Audio Video (of “the competition in London knows us” fame). Aiken originally rented movies out of his storefront.

“I decided that I needed more space for products,” he said. “TVs were a lot bigger back then.”

Expanding was a risk, though. “[Strathroy Audio Video] had to decide if they wanted to expand and go head to head with this guy,” said Honsberger. They decided that, since Colombia Video had multiple copies of new releases, ET would become a “breadth” store.

“There are two ways of running a video store,” said Honsberger. “Breadth and depth.” ET started to purchase a wider range of films than Colombia Video, which appealed to a different customer-base. “The stores complemented each other,” he said. Honsberger’s catalogue now boasts 42,000 titles.

The video rental landscape was constantly changing, though, and Colombia Video moved on. “We have survived 11 different video stores,” said Honsberger.

This is a feat, considering the obstacles he has faced. When DVDs started becoming more popular, film studios decided to forgo the old system and make new movies available for purchase right away. Without a period of exclusivity, rental stores had to start to tightening their belts.

Honsberger decided to diversify. He noticed that there was nowhere in Strathroy to buy music, so he started selling albums from Canada’s Top 100.

But then local pressures made things even more difficult.

“We had a triple-whammy a few years ago,” said Honsberger. “Walmart, Canadian Tire, and the Great Canadian Superstore all opened and the bottom fell out of the downtown area.”

But Honsberger persevered. He began selling band shirts, candy, Pokemon cards, board games, posters, and other merchandise that couldn’t be found elsewhere in town. He also started the Entertainment Tonight Movie Club. For $10 per month, people can rent four films from ET’s extensive catalogue as often as they want. Honsberger said that this has reinvigorated his business. Entertainment Tonight has been a fixture in downtown Strathroy since 1988.
Photo by Clark Teeple

“Back in the early days, people were excited to rent movies,” he said. “With the movie club, we’re starting to see people get excited again. They’re experimenting with kinds of film they normally wouldn’t watch because there’s no risk involved.” If they don’t like it, they can return it and get a different one for free.

As for the cat… Honsberger recently got a cat named Scout to keep him company during his 80-hour weeks.

“Typically, if there’s a store cat, you would expect it to be social,” he said. “She’s really not.”

Scout is a Savannah cat, meaning that she’s a mix between a regular house cat and an African wildcat called a serval. It’s fitting, really. Entertainment Tonight is a video rental store crossed with something else, an eclectic collection of films and things that you wouldn’t know where else to find. It has survived, and by all indications will continue to survive, by being different.