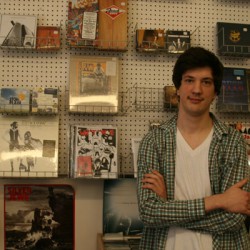 It’s Easter weekend, the weather is finally warming up and downtown London is buzzing as people enjoy the warmest weather in weeks.

Andy Grimster stands near the front of the store, greeting many of the customers by name.

“There is a huge community in here. I’ll probably recognize and probably have conversations with like 40 to 50 per cent of the people that come in here today,” said Grimster, who works at Grooves.

“It’s a bit of an escape for a lot of people to come in here and get away for a little bit.”

Grooves is one of London’s independent record stores. They sell new and used vinyl and CDs, from classic rock and blues to indie rock. Records at Grooves are arranged by genre and artist.
Photo by Kate McKenna.

Vinyl, also known as LP (long-playing microgroove) records, were introduced in the 1940s and were the most popular way of listening music up until the 80s and 90s when compact discs and tapes were introduced into the market. Now, with digital music taking over, music stores like HMV are going out of business, but vinyl has been making a comeback as the go-to physical form of music.

“It’s just the most collectable source of music and once you start it’s pretty hard to stop,” Grimster said. “It’s just fun and cool. You actually have it there in front of you.”

“We did kind of think [it was a fad] for a little while,” he said. “But this year we’ve seen a huge increase. For the first time since we’ve been open we’ve sold more new vinyl than new CDs.”

Grooves and other independent record stores all over the country are reaping the benefits of the vinyl trend.

Grimster said old HMV customers and Sunrise Records customers are beginning to come into the store.

But that doesn’t mean other stores aren’t trying to capitalize on vinyl’s popularity.

“We are finding that records are being sold in a lot more places that aren’t really record stores, like Urban Outfitters. Target in the States sell vinyl,” he said.

“So that kind of takes away, we’re nervous about that aspect.”

And that’s why events like April’s Record Store Day – an international day for celebrating independent record stores, this year being held on April 20 – are important. Record Store Day began in 2007 in the US, but has grown since then. Any independently owned, brick-and-mortar record store can participate. A lot of musicians and bands launch special and limited edition releases to be sold in these record stores on that day, encouraging people to support local businesses.

“It keeps the local business aspect of a city alive. So many places like chains are coming around that it’s really nice to go to a city and have a nice, family owned shop,” Grimster said.

Grooves is planning some in-store performances, games, deals and sales throughout the day.

“It gets crazy. It’s kind of like a family get together,” he said.

“Everybody knows each other, everybody’s here for the same reason. There’s great music always happening, so everybody’s always in a great mood. It’s a fantastic day.”

And the demographic of people who buy vinyl is also changing.

“It used to be like, older gentlemen, I’d say between like 30 and 60. But over the last few years it’s really grown where even 13- and 14-year-olds are coming in and buying records for the first time,” Grimster said. “So there’s a pretty big demographic now but it’s kind of concentrated on the more hardcore music fans who are like, really into it, like musicians and big fans.”

Lauren Harvey is one of those hardcore music fans. The 24-year old has just recently started to collect vinyl, and she said she and her boyfriend have about 50 records between them. Grooves Record Store has rows and shelves full of new and used vinyl and CDs.
Photo by Kate McKenna.

“My dad used to play vinyls when I was a kid. It’s a tactile form of music, and you are forced to listen to all of the songs in a row,” she said. “I suppose you’re more dedicated to purchasing from artists you really love.”

Sofija Vrbaski, 23, also collects vinyl, and said she has between 20 to 30 records.

“I guess I collect vinyls because of the obvious reasons. The sound quality is the main reason, because it just sounds better when it’s classic rock or Motown and it’s got that dusty, gritty sound,” she said.

And what about the musicians who choose to release their music on vinyl?

Sam Watkins, 23, is half of the London, England-based noise-pop duo, Playlounge.

Playlounge released their first record at the end of last year, called Thrash Magic, after Fear & Records, a vinyl-only record label, approached them.

“It was all about timing, really,” Watkins said in a phone interview. “Releasing it on CD wasn’t a part of the arrangement.”

And Watkins also supports vinyl as a music lover himself.

“I think with illegal downloading and the decline of the music industry it’s time for the real music lovers to shine,” he said.

“There’s so many great people setting up their own labels to release all these amazing bands and it works because they know, now more than ever, people want to support them.” Some of Grooves’ vinyl and CDs on display.
Photo by Kate McKenna.

While Playlounge won’t be playing any shows on Record Store Day this year, Watkins is hoping to “enjoy the madness.”

Back at Grooves, Grimster is gearing up for Record Store Day.

“It brings in so much traffic that we’re going to be gaining a few extra customers here and there,” he said.

“So just getting all those people in, getting the word out there that records are still cool is good enough for us to help keep us going.”