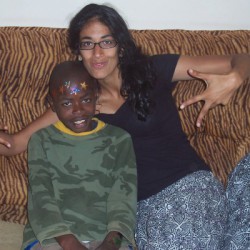 Such a genuine introduction is not exactly surprising, considering that Supriya spends her limited free time doing what she can to improve the lives of people half a world away.

“My mom taught me that giving is how you get meaning out of life,” she said. “I feel like I need to give back. If I had been born in India, my life would have been so different.”

Unlike her hypothetical life in India, Supriya was born in Carrying Place, a hamlet just south of Trenton, that was once in the running to be the capital of Ontario. She is now 26 years old, studying medicine at Western University with the goal of becoming an orthopedic surgeon. She likes to keep busy, so she plays competitive soccer, volunteers at Ark Aid, and, when she has a few minutes, she puts Tanzanian children through school, crossing the Atlantic every so often to check on their progress.

During her first year of medical school, Supriya spent eight weeks working in leprosy communities and HIV clinics with seven other students from the Schulich School of Medicine and Dentistry. It was an eye-opening experience of a degree beyond the cliché.

“You see a lot of diseases that you don’t see here,” she said. “People there are suffering from things that we can easily treat, but they are paying out of pocket. If they have really high blood pressure, then maybe they’ll pay for a week of treatment… but that’s it.” Supriya spent much of her time in Tanzania getting to know local children.
Photo courtesy of Supriya Singh

Supriya had volunteered with charities and missions here in Canada before, but this was poverty on a scale that she hadn’t seen.

Many of her patients had rheumatic heart disease stemming from easily treatable strep infections. “Little children would come and we would listen to their heartbeats. It wasn’t the normal thump-thump. It was more of a swish,” she said. “Even as a first-year med student, I would listen and think ‘uh oh… this is not good.’ ”

But with only a few months of medical training, Supriya knew that she couldn’t save everyone.

“I realized as a first-year medical student that my opportunity to go abroad was more for me, just because I didn’t have a lot of skills or knowledge,” she said.

With that in mind, she tried to find other ways to help. The answer came when she had some time off from the clinics, time she spent playing soccer with local children. Supriya has played soccer for a long time, so she fit right in.

“If you bring a ball anywhere in Tanzania, you’ll make 100 friends,” she said. “Kids just come out of the bushes. Five-year-olds were there and they were better than me.”

After getting to know them, Supriya realized that the answer to many of the problems the children faced could be solved by education. “No matter how much medicine we bring, it’s the fact that these kids are living in the street that’s making them sick,” she said.

The problem is that education, even public education, is expensive in Tanzania. Most children only attend school sporadically. Although many teach themselves English, Tanzanian children often lack employable skills.

Supriya decided to learn Swahili in order to learn more about the children she met. One of them, Emmanuel Zawadi, had put together a homemade cellphone. He was 15 at the time. She said his enthusiasm and ability to learn was magnetic.

“Despite the world slamming the door in his face, he always had his arms open,” she said.

She developed friendships with Emmanuel and his friends, like Godlove, Enoch, Mau, Erick, Mussa, and John Julius.

“I had fallen in love with them,” she said. “They were my brothers and sisters and I wanted to see what I could do for them.”

She was truly devoted, according to Marc Lipkus, one of the other medical students who went to Tanzania.

“She was, and is, a machine. She would only sleep for four or five hours a night, but she would just keep going,” he said. “After all her work, she would hang out with the kids until the sun went down. Then she would wake up and do it all again.”

Lipkus, who is starting his residency in emergency medicine this year, said that everyone on the trip admired Supriya’s dedication.

“She’s the closest thing to selfless there is,” he said. “Combined with her intelligence and tenacity… that’s the trifecta. She’s the kind of person who can really make a difference.”

The group left Tanzania with a new perspective and without many of their belongings. “When we were leaving, most of us donated pretty much everything we brought,” said Lipkus.

Like Supriya, Lipkus knew that the trip was more of a learning experience for him than it was a benefit to the people there.

“You do your best, you do what you can, but you can’t do everything. You’re there to learn,” he said.

“But even just showing that there are people out there who care means a lot,” he added.

When the group returned to Canada, Supriya immediately went to work fundraising. With the help of an elementary school teacher named Audrey Wong, she managed to raise $8,000. Her dedication did not go unnoticed by her classmates.

“Supriya acts as the social conscience of our class,” said Michelle Fraser, a close friend and roommate during their second year of medical school. “Her compassion permeates all aspects of her life.”

Another classmate, Rinu Pazhekattu, even recruited her to speak at the Hungry for Change Gala, a Western University fundraiser for global health projects.

“Her commitment and unique perspective are not only inspirational, but draw attention to what a difference we can make through global health initiatives,” Pazhekattu said in an email. “Her work in Tanzania shows how modest work by many hands has the potential to effect significant change.”

A year later, Supriya went to Tanzania for the second time. She decided against helping in the clinics, remembering that she could do more if she focused on education. “I still didn’t have the skills to really help,” she said. “I would have been wasting the doctors’ time.”

She spent her time with the children she had met during her first trip. The Schulich school paid for her travel and expenses, so the $8,000 raised went towards putting 12 of them through school. She was careful about how she went about it, though. Some of the kids were too old to start school, so she had to find another way to get them employed.

She decided to help the ones who were beyond their school years, like John Julius, acquire job skills through vocational training programs. She calls Julius her success story. He graduated from a one-year hotel management program and is now working in Zanzibar. “It’s incredible to hear that they’re making money and taking care of themselves,” she said.

Aside from paying for their education, Supriya got the children set up in an apartment and left laptops so she could communicate with them from Canada.

Her third and fourth years were busy, but she managed to return to Tanzania for a few weeks to check on their progress. And they were making progress. Only five of the 12 children have yet to graduate, and Supriya expects them to finish within two years. All of them will have employable skills.

As a medical student, Supriya has to budget her time wisely. “I don’t have Facebook, I don’t watch TV. I’m not what you would call ‘cool.’ ”

Even without these procrastination tools, she doesn’t have a lot of free time. Medical school is, as one would imagine, demanding. However, she said that despite her busy schedule, she has no choice but to give back to people less fortunate than herself.

“It’s so unfair that people have to live life that way,” she said. “The fact that I was born in Canada… how lucky am I?”

She hopes that her work will inspire other people to do what they can to help too. Supriya has set a high standard, but she understands that not everyone can do what she does. She said that you don’t need to go to Tanzania to find injustices.

“I think that anyone who wants to make a difference just needs to break out of their bubble,” she said. “We get caught up so easily in mundane schedules. Go to class, go to the gym, party. And if that’s the way you want to live your life, that’s totally cool. But if you want to challenge yourself, go down to the mission. Go down to the shelters. Poverty isn’t that far away from our front doors.”

If you would like to contribute, you can get in touch with Supriya at supriya32@hotmail.com.

They play video games so you don’t have to
Road trip: Baseball life far from home