The event took place on Purple Day, the biggest day of activism during Epilepsy Awareness Month. W.E.A.R. was organized by Western students with support from London’s Epilepsy Support Centre and combined education and interactivity with information booths, activities, presentations and give aways.

The point of the event, a collaboration between Western Serves and London’s Epilepsy Support Centre (ESC), was to try to inform the Western community of how common the condition is and to try to make people more comfortable in speaking up about their struggle.

Robin Elizabeth De Angelis, a MIT student in her third year, got involved with W.E.A.R. after working for the ESC. She said that few people know that one out of every 100 Canadians will be diagnosed with epilepsy, and one in 10 will suffer a seizure during their lifetime.

“It’s something that a lot of people aren’t aware of but it’s extremely common and there is a lot of stigma surrounding it,” she said.

Despite this, De Angelis said that many people approached volunteers to talk about their struggles with the disease or that of a loved one.

Event organizers were pleased with the turnout.

“That was very exciting for us,” she said. “A lot of people with epilepsy don’t want to talk about it.”

The results of the rally were a pleasant surprise for Epilepsy Support Centre staff like Tabitha Vircillo. She said that there was a very large social media presence surrounding the W.E.A.R. for a first time event. 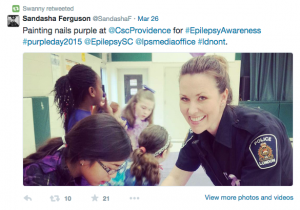 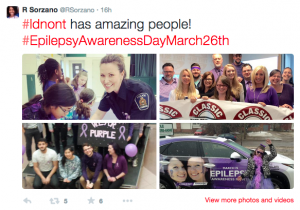 “We definitely met our goals in raising awareness,” Vircillo said.

The event committee was made up of Western students who all had experience working with the Epilepsy Support Centre in the past. While the centre provided support for the committee and supplied the educational material that was featured, Western students took the lead role in organizing and executing the event.

Vircillo said that the success of the event, and the tenacity and commitment of Western’s student volunteers give her high hopes for further cooperation in the future.

“I think that Western students are a great resource for us and we should utilize them more,” she said. “Next year we should definitely capitalize on their skills and abilities and their energy.”