Western Students look at Women and Work at Annual Conference

About 30 people attended the ‘Carrying the Motherload: Women, Families and Work,’ conference Friday morning hosted by the Women’s Studies faculty at Western University.

The annual conference switches topics each year, and this year’s theme was chosen by Gillian Demeyere, associate professor in women’s studies and the faculty of law.

With about 40 more people registered, participants are expected to trickle in for the rest of the event before it ends at 4:30 p.m. 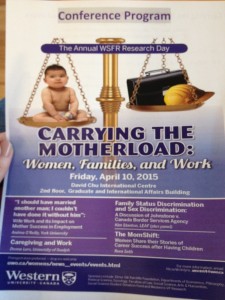 In the afternoon, Kim Stanton, Legal Director for the Legal Education and Action Fund (LEAF), and a panel of law professors will discuss Johnstone v AG Canada. Law professor Shannon Webb, who will sit on the panel, says this is an important case looking for women’s rights.

The case involves a women who had asked for childcare accommodations, so a switch in schedule, from her employer. Instead, they offered her reduced hours. She launched a complaint to the Human Rights Commission saying she was discriminated against, contrary to the ‘family status’ section of Canadian Human Rights Act.

Webb will be using this case to bring in the topic of the elderly, showing why elder care should be considered equal to child care.

“As our society is aging, we’re going to have this demographic shift and it’s going to be more and more of an issue,” she said. “Over 20 per cent of those caretakers are within that sandwich generation, which is having a child beneath the age of 18 and elder care responsibilities. So I believe this is going to become more and more important for us.”

Several students made-up Friday’s audience, including Masters of Education student Mark Henshaw. His studies include speaking with high school boys about violence against women to see where they are with the issue and how to make it more relevant to them. Henshaw was one of two men in the audience Friday morning, coming to the event to network with the feminist community.

“I came to just hear the issues that people find are important right now within that umbrella,” he said. “Any feminist issue is an issue of mine.”

Courtney Brewer, currently in her second year of the doctorate program at the faculty of education, felt compelled to attend because of her interest in feminism. Before the speeches began, she said she was interested in hearing what the speakers would say about the type of work associated with motherhood.

“I think it’s a topic a lot of students need to be interested in,” she said. “It’s about recognizing what counts as work and what doesn’t count as work, so if we’re only going to count people who leave their house and do something that takes place in the business world as work, we’re discounting all of the caring activities that go on in our world. And if you look at the caring professions, like child care or nursing or elder care, those ones tend to be paid lower.”

One of the day’s last speakers will be Melanie Stone, a first year PhD student in the faculty of women’s studies.

As a mother of a seven-year-old daughter, she feels strongly about conferences like these taking place and informing students.

“I think there’s more mom’s on campus than we see…especially in graduate studies. And I think a lot of times we forget that they’re here,” she said. “I’m hoping that we can see a broader engagement with mothers on campus…where are they? What are they doing? Are we doing enough to allow for moms to succeed, or is our institution still set-up to only serve single people?”

Stone’s talk will be looking at her research into motherhood and disabilities. After 16 years at the Multiple Sclerosis Society and working in accessibility at the Region of Peel, she met many mothers who taught her how women continue to parent despite their challenges.

“Instead of looking at the problem of disability as located in the person, I look at it as, what are the structural barriers to successful parenting, what are the structural barriers put in place to keep women from parenting?,” she said. “So one of the things I look at is how are parks set-up? How are hospitals designed? How are cribs structured? Well they’re all designed for an able mom.”

The conference’s keynote speaker will be York University professor Andrea O’Reilly, who is also the co-editor/editor on 12 books on motherhood.

Her talk will focus on wife work and its impact on successful employment. Her speech will be at 2:00 p.m., with the event continuing until 4:30 p.m. at the David Chu International Centre in Western’s International and Graduate Affairs Building.