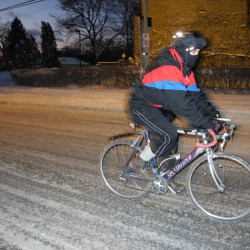 Eric Steeves leans forward and touches a black band on his ankle. A digital display flashes across the band, showing the time. But it also shows calories spent and steps. “I use it as a pedometer. It syncs up with an iPhone,” Steeves said.

He doesn’t use the electronic band for jogging. Instead, he uses it to count distance on his bike, which he rides all year, even in the winter. Steeves is one of the few Londoners seen riding their bicycles when the streets are covered in ice and temperatures plunge below zero. Steeves, Dave Mitchell and Eric Shepperd are three London cyclists who brave the elements in all seasons.

When windchill factors drop the mercury to face-stinging temperatures, it’s a challenge to leave the house in the morning. Steeves, 34, is ready and happy to meet that challenge, even with his shaved head. He wears a balaclava over his face and protects his helmet with a water-resistant cover. On his body, he sports a black shirt made of wicking fabric, a skin-tight shirt that draws away moisture, and a black Montreal Canadiens jacket.

Below the waist, he layers up with long underwear, leggings, pants and thick socks. “I dress very modularly, so I can take off something if I get hot. It’s not that bad. But I have to put all this crap on – that’s the most annoying thing actually.” Those layers prepare him for his busy days as a freelance computer technician, darting around London on the thin tires of his road bike.

Cycling is so important to Steeves that a few years ago, he explained, his father bought him a car for his birthday, but he sold it. “I thought I would use it and thus bike less,” he said. “I read a quote, ‘cars run on money and make you fat. Bikes run on fat and save you money.’ ”

Moving on two wheels also comes naturally to Dave Mitchell, a computer specialist who has been cycling to school and work daily since 1992. On average, he cycles from seven to 10 kilometres a day.Mitchell, 38, is tall and wiry and speaks in a smooth and calm voice. In the winter he rides a compact, foldable bike. He wears fewer layers than Steeves – just a winter jacket, a tuque, pants, gloves and a neoprene face mask that he only puts on if it’s colder than -10 C, he said.

He is nonchalant about the winter cold. “I don’t think I’ve had weather that was too cold. We had -20 one day and I actually liked it, because you’re not damp, and it doesn’t snow at that temperature,” he explained.

The cold may not deter winter cyclists, but cold brings ice onto the roads. Ice is hard, slippery and dangerous. Or is it? Mitchell brushed aside the danger of ice and said he has yet to fall on the ice or sustain an injury. “I don’t think of it as dangerous really. Sharing the roads with cars is the biggest danger. It really comes down to skill. You brake early because you know it’ll be harder to brake,” he said.

Cars are less of a concern to Steeves. “They give me a lot more space,” he said with a smile. “I think it’s that perceived danger that causes them to be more cautious. I would say they’re hideously bad in the summer.”

Eric Shepperd is another year-round cyclist. The long-haired, 29-year-old computer technician has cycled to work every day this winter. “There was one day it was kind of touch-and-go because of lots of snow, but I made it anyway,” he said.

Like Mitchell and Steeves, Shepperd acknowledges the dangers but focuses more on the sense of accomplishment he receives from winter cycling. “It’s exciting because it’s dangerous,” he said. “It makes you feel alive. I hauled ass through this snow, while everybody else took the bus or took their car.”

Cycling also seems like a more practical and enjoyable option than walking or driving. “In the winter you get stuck indoors,” Shepperd said. “For me, it’s exercise; it’s an escape, driving is expensive and walking takes too long.”

For Steeves, cycling represents a personal achievement. Although he has only been cycling regularly for five years, riding his bike helped him drop from 319 to 208 pounds. “It changed my life,” he said. “As far as exercise goes, cycling was the main way I lost weight.”

Steeves puts on his helmet before he rides off into the cold. It looks bulky with its cover and small mirror protruding from a rod attached to the helmet. His body is puffy with all of his layers. But he shrugs off the surprise that some may have with winter biking. “People say ‘Oh, I could never do that.’ Oh, you can’t? I can. I’m a badass, I guess!”

Photos and video by Blair McBride