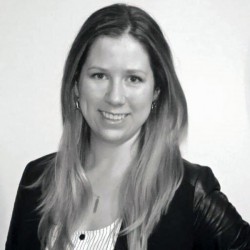 When you’re a digital journalist, be prepared to work anywhere.

And anywhere can be a lecture theatre in a local college when floodwaters inch up an incline towards your broadcasting station and threaten to swamp it.

“It was the most unorthodox thing I’ve experienced,” said Amanda Connolly, referring to the makeshift newsroom she and other CBC reporters worked in when the raging Bow River marooned a large area of Calgary in 2013.

Connolly was a digital reporter at the time. When the CBC was forced to evacuate, staff left without computers and other equipment they needed to edit and package the news.

The CBC, nevertheless, won a few awards for its online coverage. “It pushed you,” Connolly said, “to innovate in a way you’re not always forced to do when things are convenient for you.”

Her willingness to embrace innovation is what brought her to iPolitics in Ottawa where she now works as National Security Reporter. The non-partisan, online news site – created in 2011 – focuses on Canadian political news. It’s located a block away from Parliament Hill.

The 24-year-old reporter spends a great deal of time on the Hill, chasing stories, chatting with MPs and covering committee meetings.

And she still finds herself writing stories in rooms other than her office. “I work from the Hot Room,” she said, “which is a room up on the Hill for reporters to use as a base.”

Her on-the-go tools are an iPad and iPhone. She loads her stories into iPolitics’ content management system using her iPad. She said it’s an easier option than lugging around a laptop.

Digital journalist is a broad term, Connolly said. The job varies depending on whom you work for. When she worked for CBC, she re-wrote other reporters’ stories for the website.

“You’re filing eight to 10 short stories a day off broadcast scripts, so you’re not actually doing the research on them,” she said.

But at iPolitics, she generates her own stories. She’s up at seven most mornings, scanning various media outlets for story ideas while she has breakfast.

And depending on what’s happening on the Hill, her weekly output varies. Sometimes she’ll write three to five stories a week. At other times – when events unfold at a brisk pace – her output increases.

“For example, with the ISIS mission and Bill C-51, I’ve been doing about three stories a day for the last two weeks,” she said.

What stands out most about Connolly is her ability to identify stories then get people to talk to her, said Christopher Waddell, associate professor at Carleton University’s journalism school and associate editor at iPolitics.

“She really jumps on things when she sees them,” he said, “and is able to turn around stories very quickly, which is valuable for an online publication.”

Connolly credits her former job at CBC for teaching her how to write rapidly. “This skill is really important for an online reporter,” she said. At iPolitics, she writes and posts her stories quickly then further develops them over the course of several hours as she gathers new material.

Even though she said CBC was a fantastic training ground for acquiring different styles of journalistic writing, she wanted to put to good use the terrorism and conflict studies courses she took while completing her four-year Bachelor of Journalism degree at Carleton University.

“You don’t necessarily have the chance to take on a beat or do higher profile stories that you would if you were working for a smaller start-up,” Connolly said.

She got that opportunity at iPolitics. There are few Canadian reporters whose beat focuses exclusively on national security, she said. And there certainly aren’t any guidelines on how to cover it. The goal is to make faraway conflicts relevant to Canadians.

She said she relies on a lot of international media sites, such as Defense One, Al-Monitor, Al Jazeera, Al Arabiya, to help build her stories. But parliamentary committees are where she finds a lot of ideas that she then shapes into informative and compelling news stories.

“People don’t always cover Committee,” said the Edmonton-born reporter, who has lived in a number of Canadian cities. “It’s easy to leave it be and wait for the issues to become bigger. But you get a head start when you’re in committee….”

When MPs are in Ottawa, she said there is never a shortage of ideas to turn into stories.

“Being able to figure out what the nature of the story is and present it in a very tight, concise fashion,” said Waddell, who was one of Connolly’s professors at Carleton, is what makes a good online journalist. “Although you’ve got unlimited space, readers won’t look at unlimited [text]. Your writing should get straight to the point,” he said.

Connolly said it’s a great time to be a digital reporter. She loves its challenges and the pressure to improvise and adapt to new methods of storytelling.

“There are so many start-ups and other outlets that are really innovating and pushing the boundaries of what you can do in terms of design and in terms of storytelling format,” she said. “You’re always kept on your toes with digital reporting.”

From UWO to CTV – A Day in the Life of an Online Journalist
Sheena Lyonnais, new media master and versatile writer