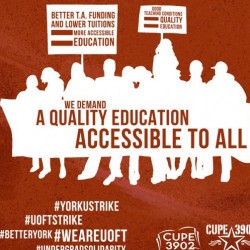 The CUPE 3903 strike began three weeks ago at York University and U of T and according to one student, Veronica Horta, “It’s complete anarchy at campus.”

On Tuesday, some of the classes resumed and some of those classes were Veronica’s. 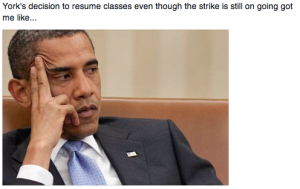 Photo courtesy of Taylor Marshall- a student at York University

“I shamefully crossed the picket line, while they were out in the cold,” said Horta.

She added, “I feel endangered having to cross the picket line at Kelle. People are getting run over, punched, and racial and sexist slurs are being tossed around. And of course most of us just want our education.”

CUPE 3903, represents the contract faculty (professors hired on a course-by-course basis or on short-term contracts), teaching assistants, graduate assistants, and research assistants at York University and U of T.

On August 31, 2014 the Collective Agreement between the university and the CUPE expired. Since then- six months ago- the union has been trying to negotiate a new contract with the university. This includes, better job security, providing an equitable, accessible and affordable learning and working experience.

“It’s hard to pick between the two. Some students could care less about the strike. Some are very upset towards the 3903 and some are upset at York,” said Horta.

But Eric Lohman a PH.D candidate and lecturer in Media Studies at the University of Western Ontario knows which side he would be on. “I am dead set against the resumption of classes when TAs and GAs are on strike. As a matter of principal, I would never cross a picket line.”

He adds that, “As a TA, my working environment is a student’s learning environment, which is why it’s so important for students to not allow the administration to manipulate them into attending classes during a strike. This is the same as becoming a scab, someone used in order to break a strike. It will prolong the strike, and may weaken the bargaining position of the TAs and GAs.”

Horta, like many other students, is in her final year. She says, “I was hoping to graduate on time. York said they are trying to maintain their integrity of our courses, but that’s a complete load of bulls—- cause they have reduced the term, we have less time for exams now. I feel like I am being bullied.”

Sadie Lou is a teaching assistant for a psychological intervention and athletic rehabilitation sport class at the University of Western Ontario. Lou is responsible for marking and teaching approximately 40 students.

She says that, “If we stopped working, the students here at Western would be losing their minds and would be so stressed out.”

Horta can attest to this stress. She says not only has this disruption jeopardized her academic career, but it has also disrupted her life. “I haven’t been able to tell my employers at my job that I can or cannot work, because it’s very unpredictable. We go day by day. But I know I’ve missed out on many days of work simply, because I don’t know if I can go or not.”

Saturday, CUPE 3903 is holding a Solidarity Rally at Yonge-Dundas Square. According to their Facebook page, 1,498 people say they will attend the event.

According to the CUPE’s Facebook page, “All undergraduates and Toronto residents are invited to march in solidarity with teaching assistants (TAs), Course Instructors (CIs) and graduate assistants (GAs) from York University and the University of Toronto.” But the rally will also include CUPE 3904 (Ryerson University), CUPE 3908 (Trent University). In fact, Trent University TA’s union (CUPE 3908) is organizing a bus to come down to the rally.

Horta doesn’t plan on attending the rally, but she hopes the strikes will end, because it’s a, “toxic environment. I also want to graduate on time, because I have applied to school boards.”

View all posts by Amanda Whalen →