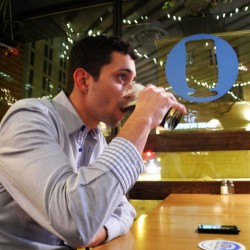 Dan Chick has trekked through a snowstorm for a beer.

Not just any beer, though.

A double chocolate cherry stout that goes down “like velvet,” says the 21-year-old Western University accounting student as he takes another sip, eddies of snow swirling outside the window.

The streets are empty as cars stay off the slick roads, but Milos’ Craft Beer Emporium on Talbot Street in downtown London is doing steady business, serving craft beer enthusiasts like Chick who are willing to brave a few brrrrrrs for a brew.

Sales of craft beer – beer that’s produced in small, independent microbreweries – have been steadily rising in Ontario, growing 45 per cent in 2011 from 2010, when sales reached approximately $190 million. In addition, craft beer led LCBO sales in all categories, according to the provincial Ministry of Economic Development and Innovation.

Reflecting the growing demand for craft beer, London is set to get its own craft brewery this spring when Forked River Brewing opens on Pacific Court in the city’s southeast end.

But does that market include students?

Reed knows the purchasing power students can have in London, home to both Western  and Fanshawe College. He and partners Steve Nazarian and Andrew Peters are all Western alumni.

“We’re definitely looking for student response,” Reed says. “Is it our core market though? Probably not.”

One thing that could hold students back from craft beer is the price, says Reed.

“Craft beer is not your buck a beer, but it’s still a bit lower than your typical imports,” Reed says, likening the price to that of Alexander Keith’s, which goes for $12.25 for a pack of six beers.

“But it’s the ingredients that set it apart. All natural, no preservatives or additives.”

For Chick, the unique taste of craft beer is worth the extra cost.

“It’s going to be different every time,” he says, scanning the menu at Milos’ for his next sample.

“Some people like consistency, but I can’t picture myself eating the same thing every day or every week. It’s the same with beer. There’s nothing fun to drinking the same beer all the time.”

But Chick knows he’s not typical.

“I’ve had friends say, ‘You drink craft beer? What is that? Like, Kraft Dinner company?’ ” he says.

“Craft beer is slowly coming out of the shadow of the hipster label, but I think the majority of students are still going to be lining up outside Jack’s for one dollar beers. I think a lot of people my age want cheap and drunk, whereas craft beer is more about conversation and socializing.”

“The students who come here are a little more thoughtful than the average barfly,” he says.

She recently moved to London from Vancouver and has been looking for local craft beers to try after getting into them through craft beer festivals in British Columbia.

Rollheiser also thinks cost can be a deterrent for younger students.

“I’ve been working for five years, so I’m just more willing to pay for the quality than students who are in their early 20s might be,” Rollheiser says.

Meanwhile, over at the LCBO, Alex Reid, a 21-year-old Fanshawe student, walks past the Ontario craft beer section without a pause.

He picks up a case of Busch lager instead, a Labatt-brewed beer that costs $9.45 for a six-pack.

“To be honest, I’ve never heard of craft beer before in my life,” Reid says.

“Cost is definitely the most important, hence why I drink Busch,” he says. “Taste doesn’t really matter. I would prefer a smooth lager, but after the fifth or sixth I can barely tell.”

Although Reid’s drinking preferences are different from Chick’s and Rollheiser’s, he thinks a craft brewery will do well in London.

“I’m sure any brewery would be popular,” Reid says. “With the amount of students flooding the area, it should be easy to market to them.”

Reid and other students might not know about craft beer now, but back at Milos’, craft beer ambassador Ahmad thinks that is changing.

“The LCBO is giving craft beer a greater focus. Now that these beers are getting out there, the exposure’s just through the roof,” Ahmad says.

As people continue to stream into Milos’, shaking snow from their coats, Ahmad says the future of craft beers in London is bright.

“Drinking craft beer is like listening to your favourite band at a concert instead of on a CD in your car,” Ahmad says.

“You can’t beat the subtle charms of a live show. That’s craft beer. That’s part of the excitement.”